This year we had a turkey butchering frolic on the Monday before Thanksgiving.
We had a wonderful time with the family and friends who came to help us.

We hatched all but the senior tom ourselves this spring.  They did really well.  They free-range all over our property grazing and catching bugs. The bourbon reds are a heritage breed. They are Thomas's project. 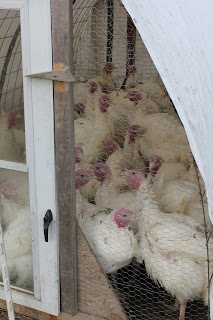 The broad breasted turkeys are always out grazing, except for the morning of butchering.  It is less stressful for them to stay contained rather than chasing them around and trying to catch them.  That has happened a few times.  The young boys seem to like when that happens, but it's not the best for the birds, so we try and avoid chasing. 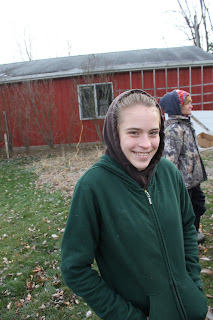 It seems the initial killing station is the place everyone wants to gather.  I prefer the garage, unless I am taking pictures. 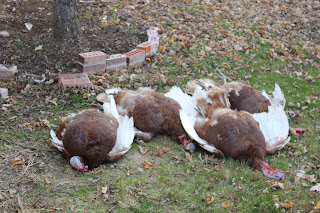 The dead birds are hauled over to the plucking station. 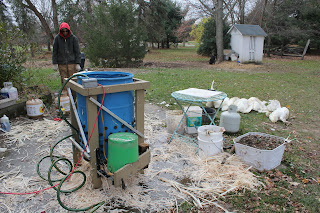 The plucking station is often a hold up as you have to maintain the water temperature to scald the birds before you put them in the plucker.  We use a version of the "Whiz-bang" plucker that Paul built.  It works well for both chickens and turkeys. 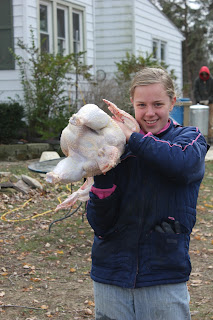 We take the feet off the turkeys before they go into the plucker, as they can get caught in the bottom ring and can result in broken legs. 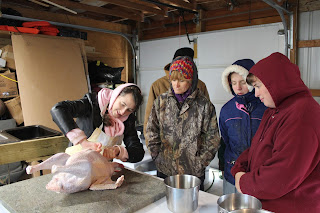 Victoria gave a demonstration on how to properly eviscerate a turkey to all the first-time helpers and those who felt they needed a review.  Turkeys are a little different than chickens.  They do require more strength to complete, but there is more room to work on the inside. 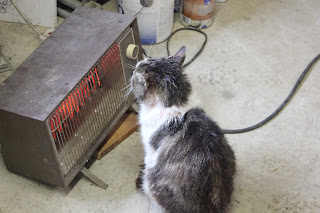 Since the temperature outside was chilly, we used heaters in the garage.  Marbles came into warm himself up as well.  Cats love a warm spot.  Marbles is now 21 years old.  He still is an active mouser.  Not bad for an old guy! 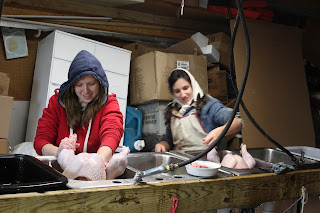 We have a very skilled QC area (Quality Control).  The birds are given a very careful going over to make sure every feather and inside has been removed.  I love it when people come back to us and say that they heave never bought a cleaner bird. 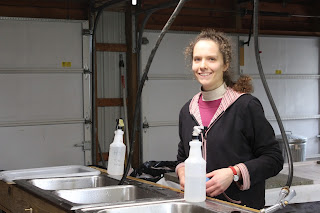 Sanitation is a big part of the process as well.  Cutting boards and knives are given a thorough cleaning between every turkey.  We use hydrogen peroxide in spray bottles and our Norwax cloths in hot soapy water. 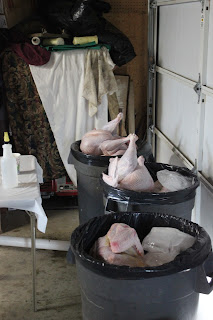 The finished birds are weighed and given a good chilling in ice water.

You never know who will show up at a butchering frolic.... 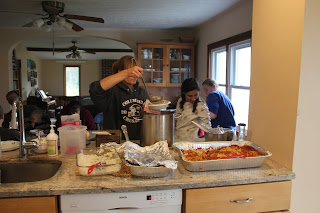 We spend a lot of time preparing for the butchering day.  A big part of our preparation is food for all the helpers.  We made big pans of enchilladas,  butternut squash soup, and several varieties of fruit cobblers. Feeding your help well, makes for happy workers. 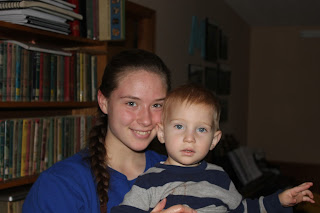 Little ones are taken care of by an older sister.   She keeps the children occupied with the legos and other toys we still have around.  She also helps with getting the food heated up for lunch. 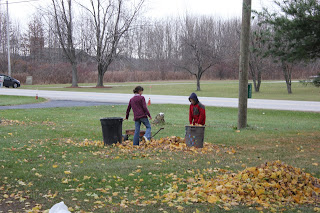 The butchering was accomplished quickly and our friends even helped with raking the yard. That was a really big help to us.

After dinner the now chilled turkeys are bagged and the ones to be cut up are cut up. 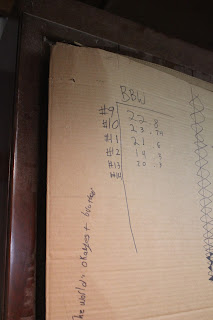 All the weights were recorded with their numbers on a BIG piece of cardboard so that we can select the right sized bird fo each customer. 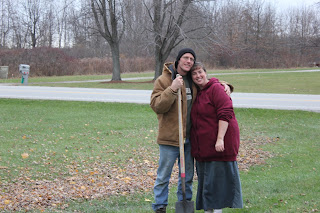 A big thank-you to the yard crew! 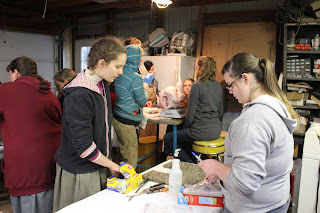 As everything was finished being bagged,  the clean-up began and our butchering day was over. It was another successful workday.  We did 30 broad breasted turkeys and 9 of the Bourbon reds. We have only 3 remaining in the freezer. 1 of the broad breasted and 2 bourbon reds.

We have loved having the turkey in the freezer.  We enjoy the turkey stock we make from the carcasses, the baked turkey thighs, the stewed turkey legs and the roasted breasts.  So much goodness. Turkeys are so yummy for more than just Thanksgiving!
Posted by ~The Mangos~ at 11:15 PM