Moving the Chicks Along

Sometimes I am so busy living that I don't have time to write about the living.  That is not necessarily a bad thing!!! 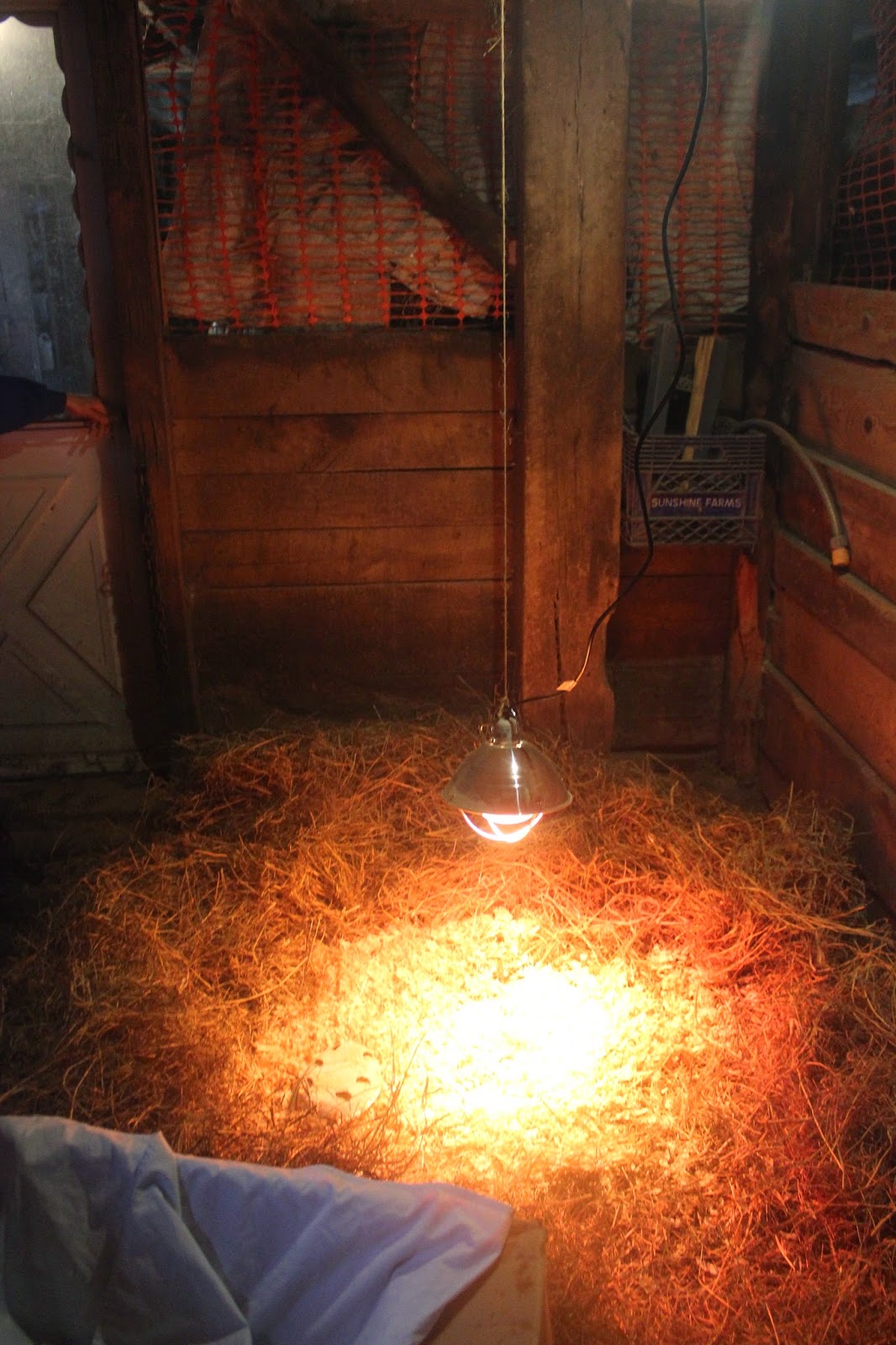 I finally couldn't stand having almost 65 chicks in the basement!  The dust was overwhelming even though most of it is contained by the sheets around the brooder.  The mobile coop is not near done and I just couldn't wait for it to be finished to get some chicks out of there.  I decided that one of the horse stalls in the barn would have to be cleaned out and made into a new home for the chicks.  This one is pretty tight and was cat proof.  There is netting along the open area on the top.  It was a very dusty job, but Paul helped me.  We then took the hay that came in the barn and spread it around the floor.  We hooked up one heat lamp.  I was too nervous to use two because the wiring in the barn is very old and decrepit. 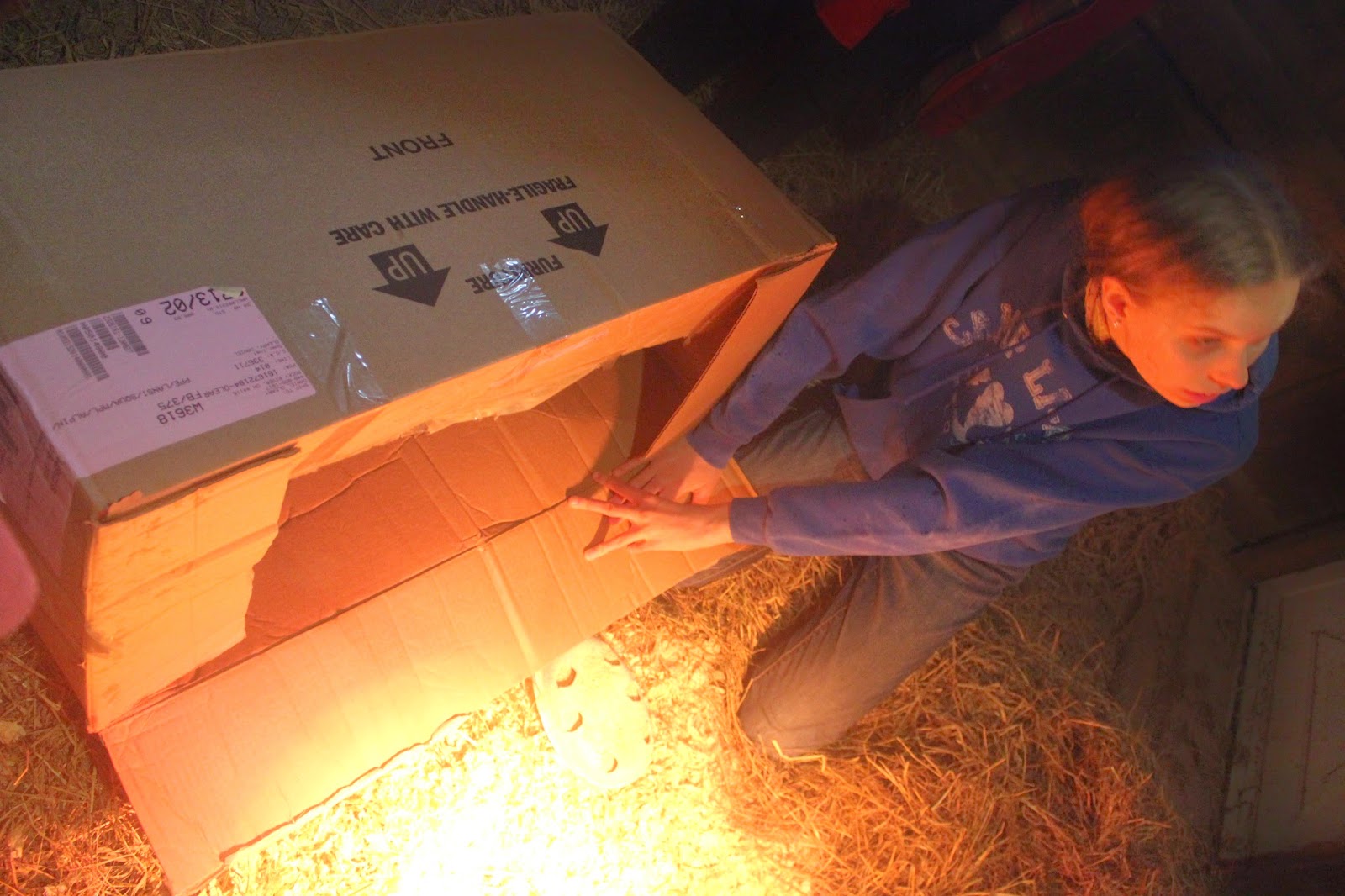 Michelle and I selected 15 of the largest most feathered chicks and brought them out in a box.  This was a challenge as they were not excited to be caught and the brooder is large.  Fortunately, Michelle has very long arms and I know how to act scary to chicks, so we could chase them down to her end. 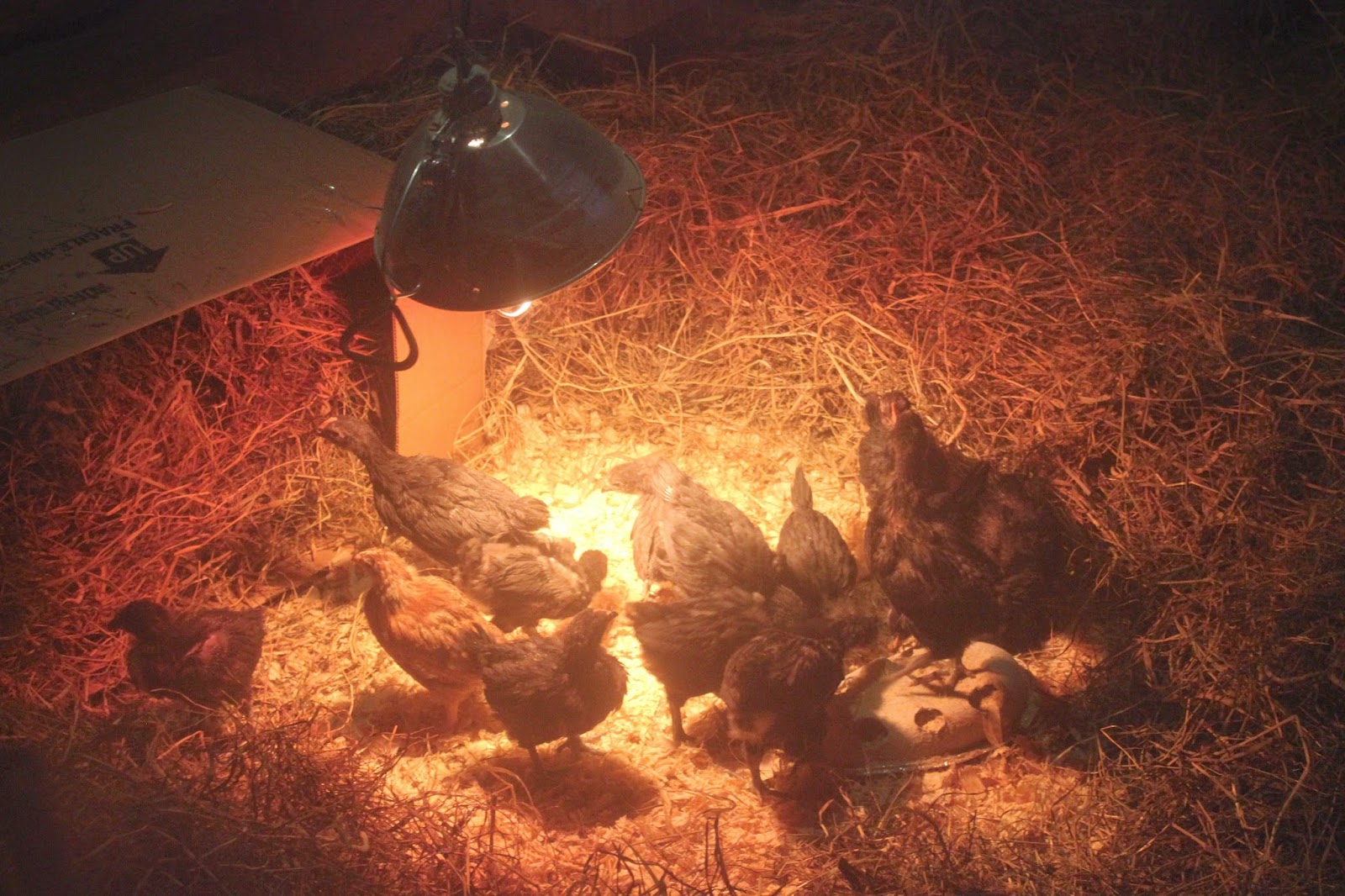 They hung out under the light or burrowed under the hay.  One has to be careful where you step!  Don't want to step on a chick.  We watched them carefully for a week.  We decided that 50 chicks that are growing rapidly was still too many to have in the basement. 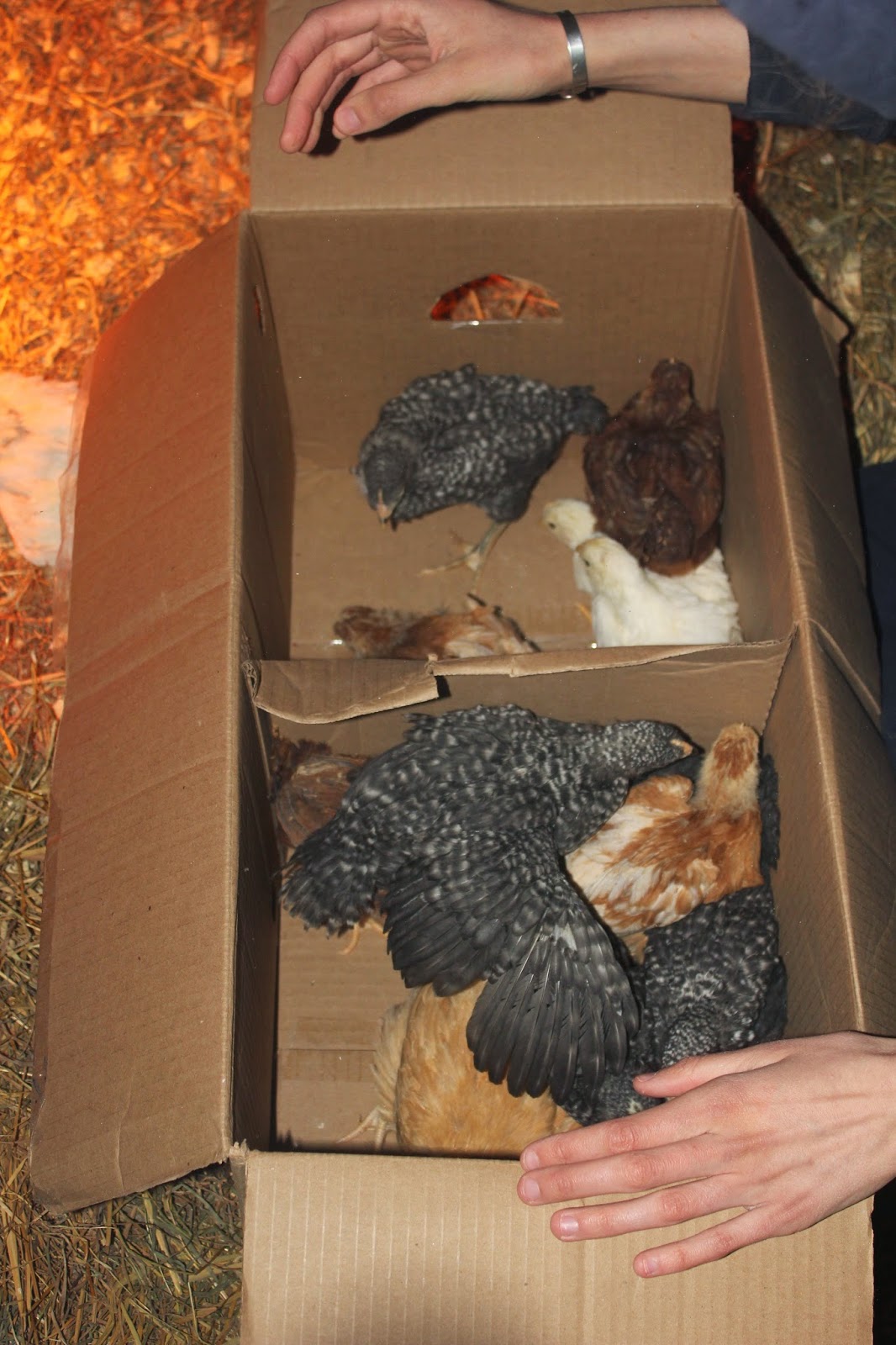 Yesterday, Michelle and I took out another 31 chicks leaving 19 chicks in the basement.  We chose the most feathered ones.  The reintegration of the chicks went smoothly.  The largest roosters quickly let the others know that they were in charge and things settled down quickly. 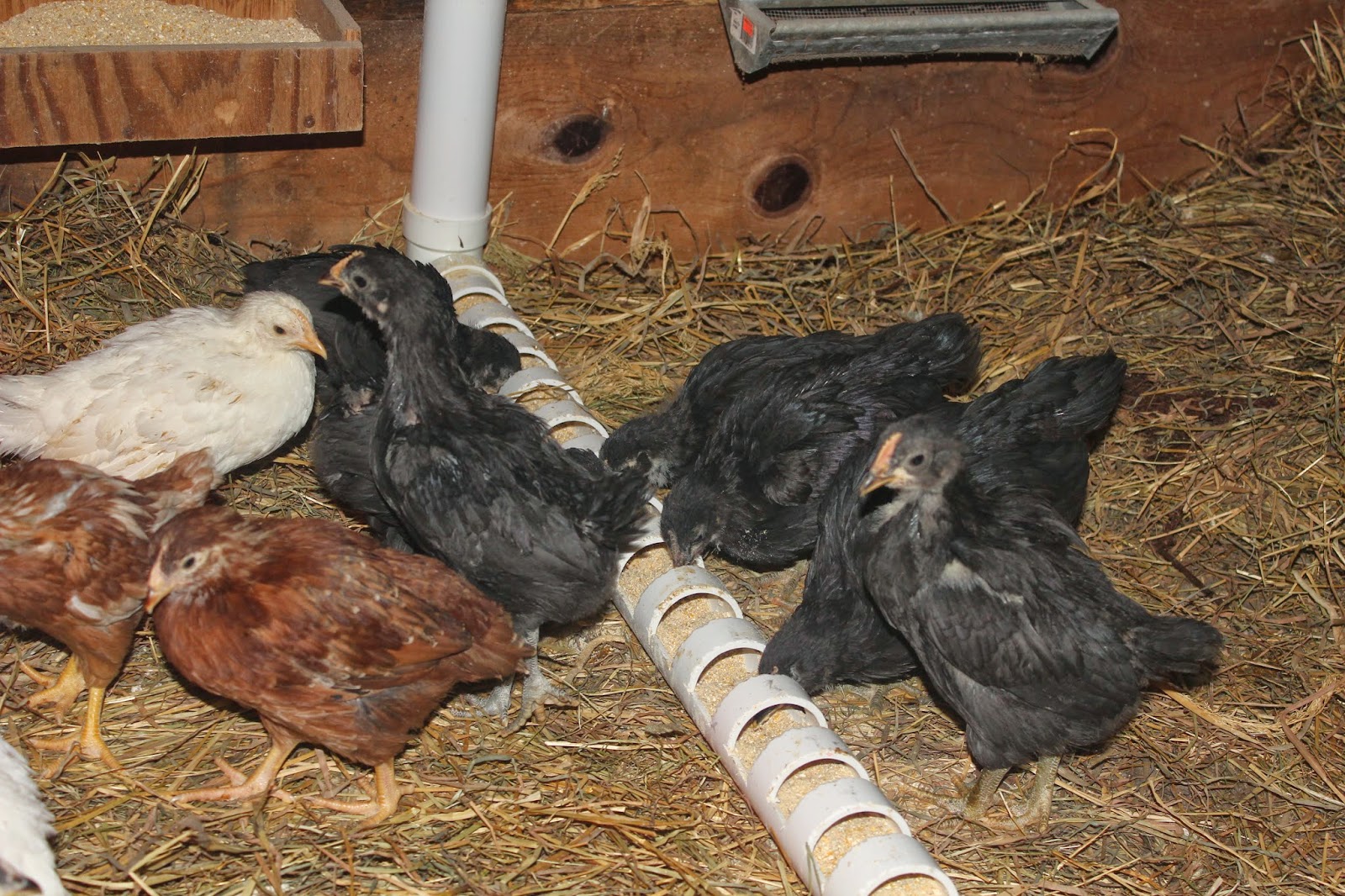 My DH made a feeder for them.  This works better than somethings we have done.  We have come up with a couple modifications for next time.  The holes are too big and are down too low.  Too much feed flows over the edges. Next time we will do 1-1.5" holes that alternate towards the the top.  The chicks do a good job though of cleaning up the spilled feed. 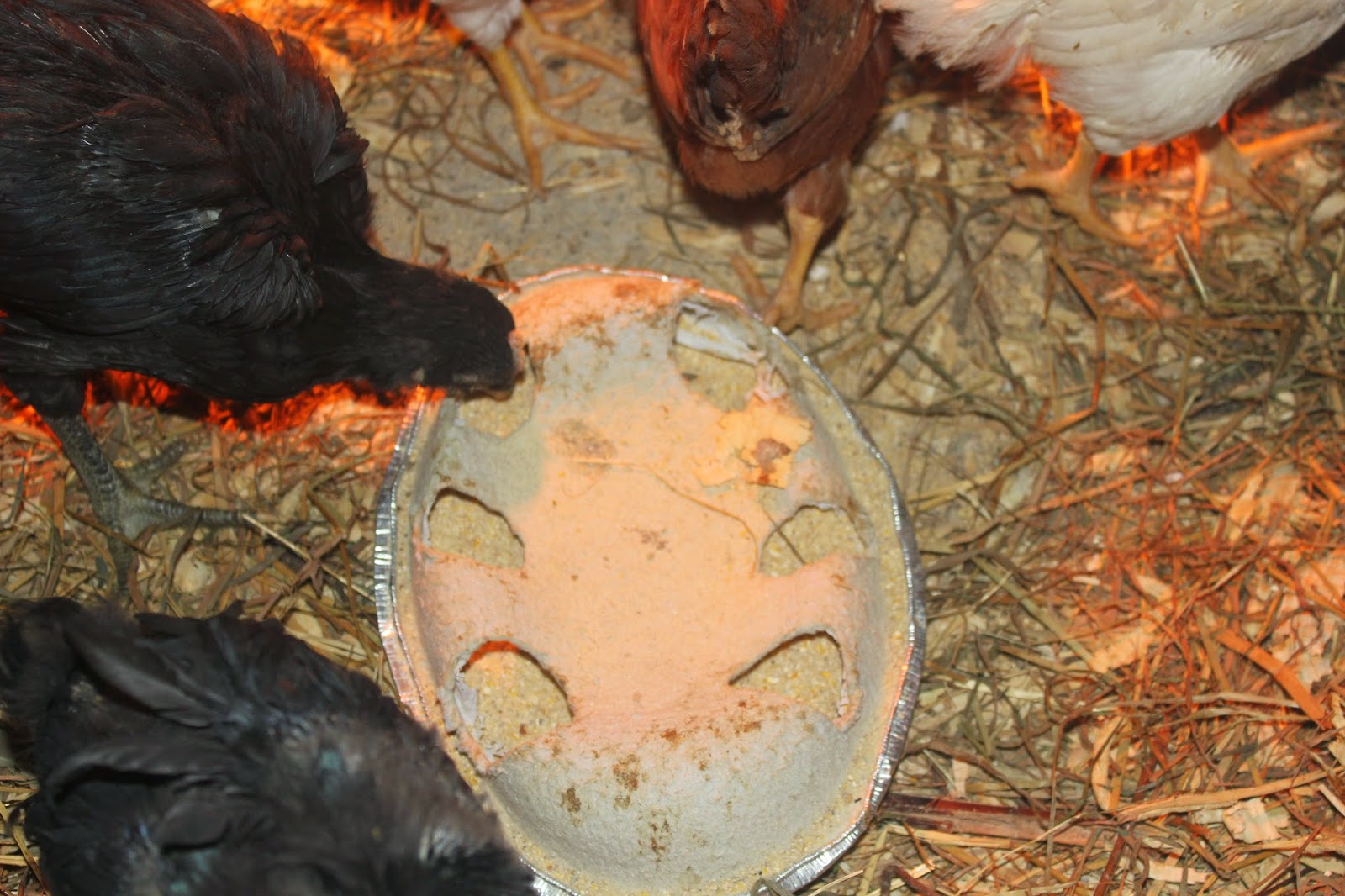 This was another homemade feeder that worked well for short term.  Can you tell what it is?  It is a Chipotle Burrito Bowl.  I washed it out and cut holes in the cardboard part.  This works well for smaller chicks.  Now that they are 5-6 weeks old they can open the top from the bottom.  I liked it because it was easy to fill and there was not much spillage. 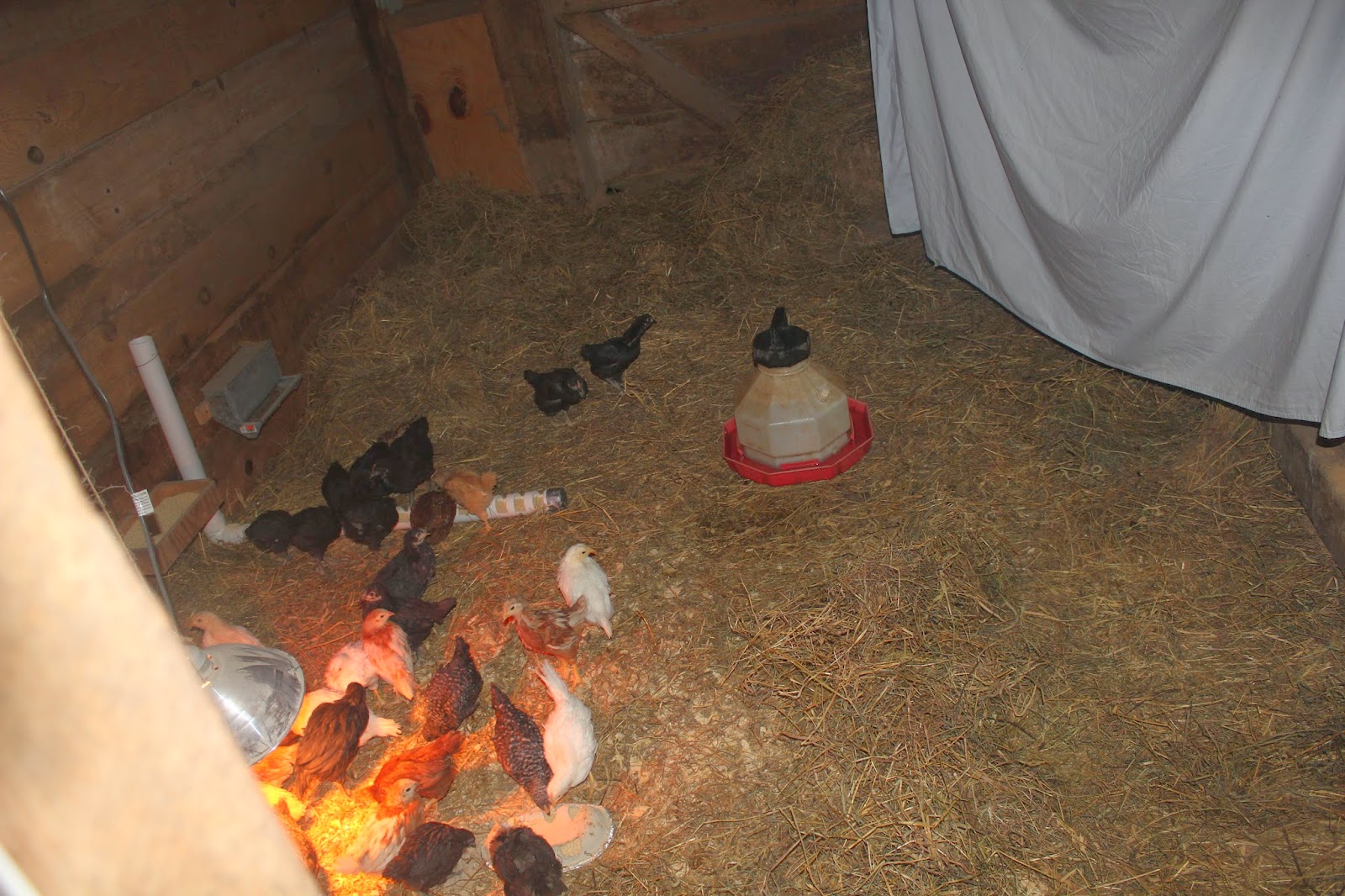 Here are the 46 chicks in the stall.  They have lots of room now.  So much better than the brooder!  The sheet is hanging there to minimize drafts.  They all seem to be thriving once more, and Mom is happier because there is so much less dust in the basement.  I am still looking at buying more chicks for meat and some turkey poults for meat later this summer and autumn.  Can't wait!  With the price of beef and pork going up so rapidly, poultry will be the more affordable option. 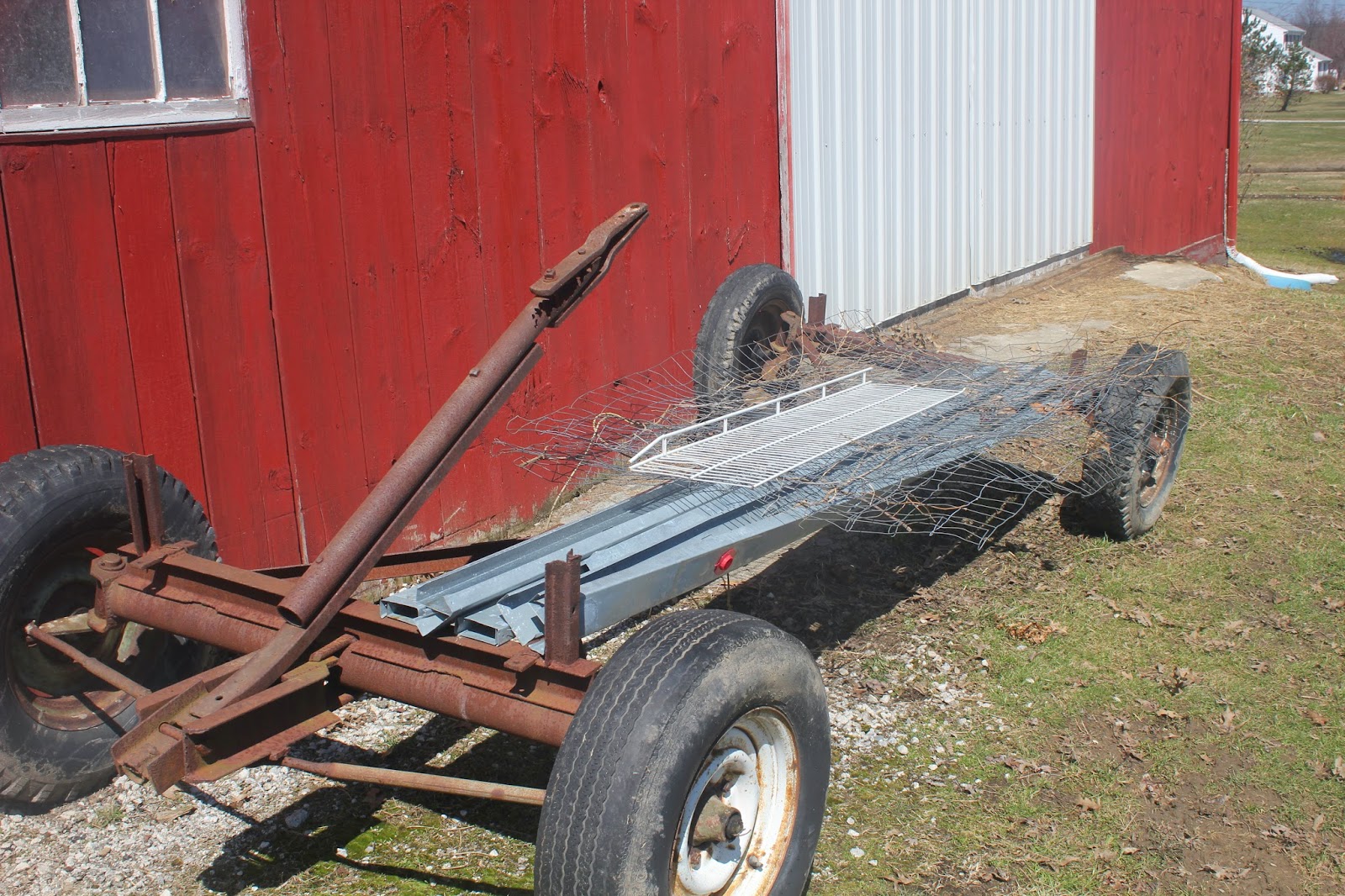 Here is how far the mobile chicken coop has come.  There is still quite a bit more work to be done on it before it is ready for the chickens!!!  The boss has an appointment with a welding friend for next week.  So grateful for a handy stall for the chickens!
Posted by ~The Mangos~ at 9:51 PM