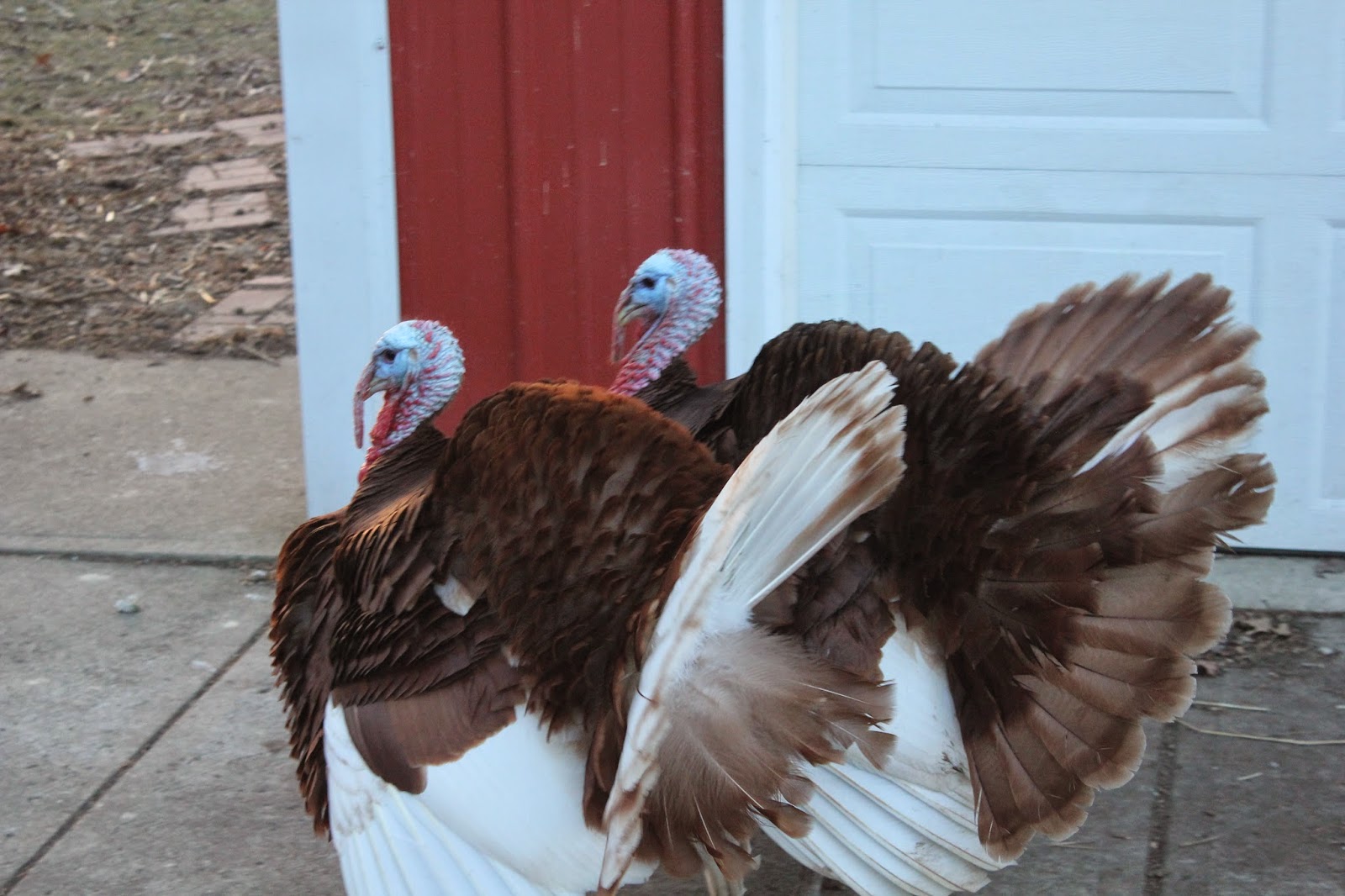 Winter is in full force here in Ohio.  The last couple weeks we have had very frigid temps.  It was going down to sub zero temps at night and only in the single digits during the day.  It has made keeping the animals warm, fed, and watered a real challenge.  So far, we have only had one winter calamity.  The Tom turkey with the brown tail met his demise in the cold.  The turkeys won't stay in their coop during the day, no matter how cold it is.  They want to free range, and they generally end up by the house.  JoAn noticed the other afternoon, that one of the toms was down and all the other turkeys were gathered around it.  I went to see and found that the tom was freshly dead.  I had T-Bob come and help me start the butchering process.  It was still fresh enough that it bled out cleanly and was able to be eaten.  I debated skinning it, which is easier, but then it can't be roasted.  Fortunately, JoAn was home that day and she helped me get the water to the right temperature (147 degrees) so that we could scald and pluck it.  Once we had the outside cleaned, I finished the job.  It went pretty easily.

We cut the bird in half and enjoyed our first roasted heritage turkey for Paul's birthday dinner.  It was DELICIOUS!  The dark meat was almost as dark as beef, and the breast was like dark meat on a commercial bird.  It was so moist!  It cooked very quickly and wasn't tough.  I roasted it like you would a game bird.  I stuffed it ( with gluten free stuffing) and roasted it at 425 for a couple hours in our electric roaster.  That worked very well.  We still have the other half in the freezer.

We did move the turkeys into a barn stall so they wouldn't freeze.

One more note on the turkeys... I am sad to announce that indeed I only have one hen left.  It turns out that the other two birds which I was hoping were hens, are toms.  Since the other tom died the two late-bloomers have been gobbling and strutting.  I am sad about that.  I was really hoping I had three hens and one tom.  This means that I will have reorder turkey poults in the spring.


Winter time is the time to plan and educate yourself about future farming projects and things you want to try and do different the next year.  Some of my ideas to try include mushroom farming, and getting more of an orchard going.  I have been reading 'Eating on the Wild Side' by Jo Robinson.  This book teaches you how to select the most nutrient varieties of food, both in the grocery store, a farmer's market or to plant in your own garden.  She tells you which are the closest to heirloom varieties.  If you are going to eat something, it might as well be the most nutritious available. I have also been reading 'The Holistic Orchard' by Michael Phillips.  He teaches you how to care for your fruit trees so that you don't need to use the chemicals, except in the most dire of situations.  After reading the book, I decided that I need to spend the next year in prepping the soil before I even think of buying and planting trees.  Everything takes time.

The pigs seem to be doing well.  The barrow (A fixed male pig) is now up to about 280+ pounds.  The sows are both about 180.  We are planning to take them into the butcher as soon as the feed we have is gone.  The feed won't keep until we get our next batch of pigs.  Might as well use it up now and turn it into bacon.  For those wondering how we weigh the pigs.... There is a calculation based on their physical measurements that allows you to calculate their weight pretty closely.  My cloth tape measurer gets used more on pigs, than on people.

T-Bob has had to work very hard during this cold spell caring for the pigs.  The metal spigot on our waterer freezes up almost as soon as the pigs stop drinking.  He has to go out every hour or two in the coldest weather and unfreeze the spigot and let all the pigs drink.  This also involves chipping the ice away in the barrel and pouring hot water over the spigot. 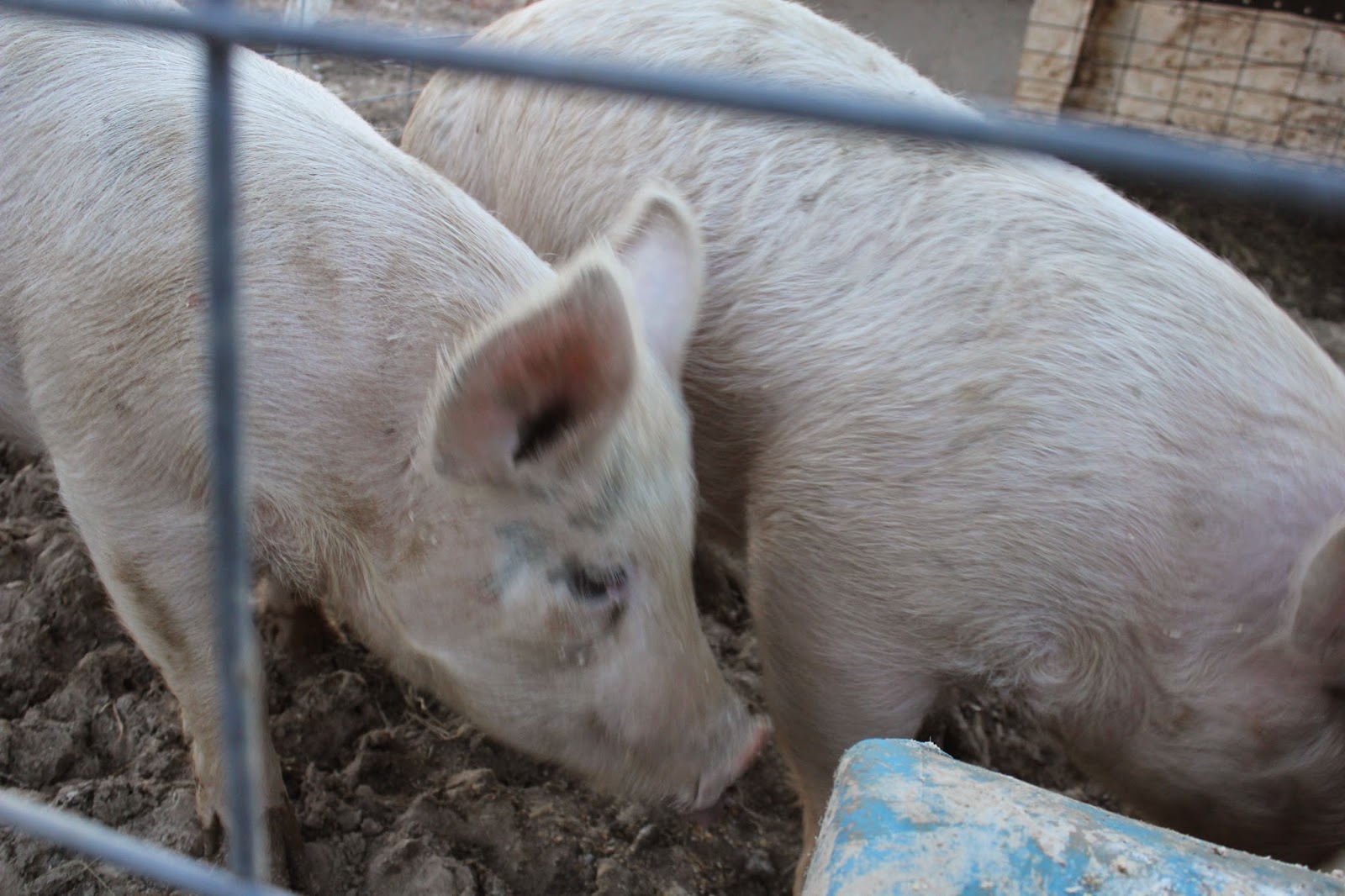 One of my other reading projects is to learn how to make my own sausages, cure my own bacon and hams and how to utilize all of a pig to the greatest of my abilities.  I am reading the books 'Beyond Bacon' and also 'The River Cottage Meat Book'.  I am really excited about eating our own pork. 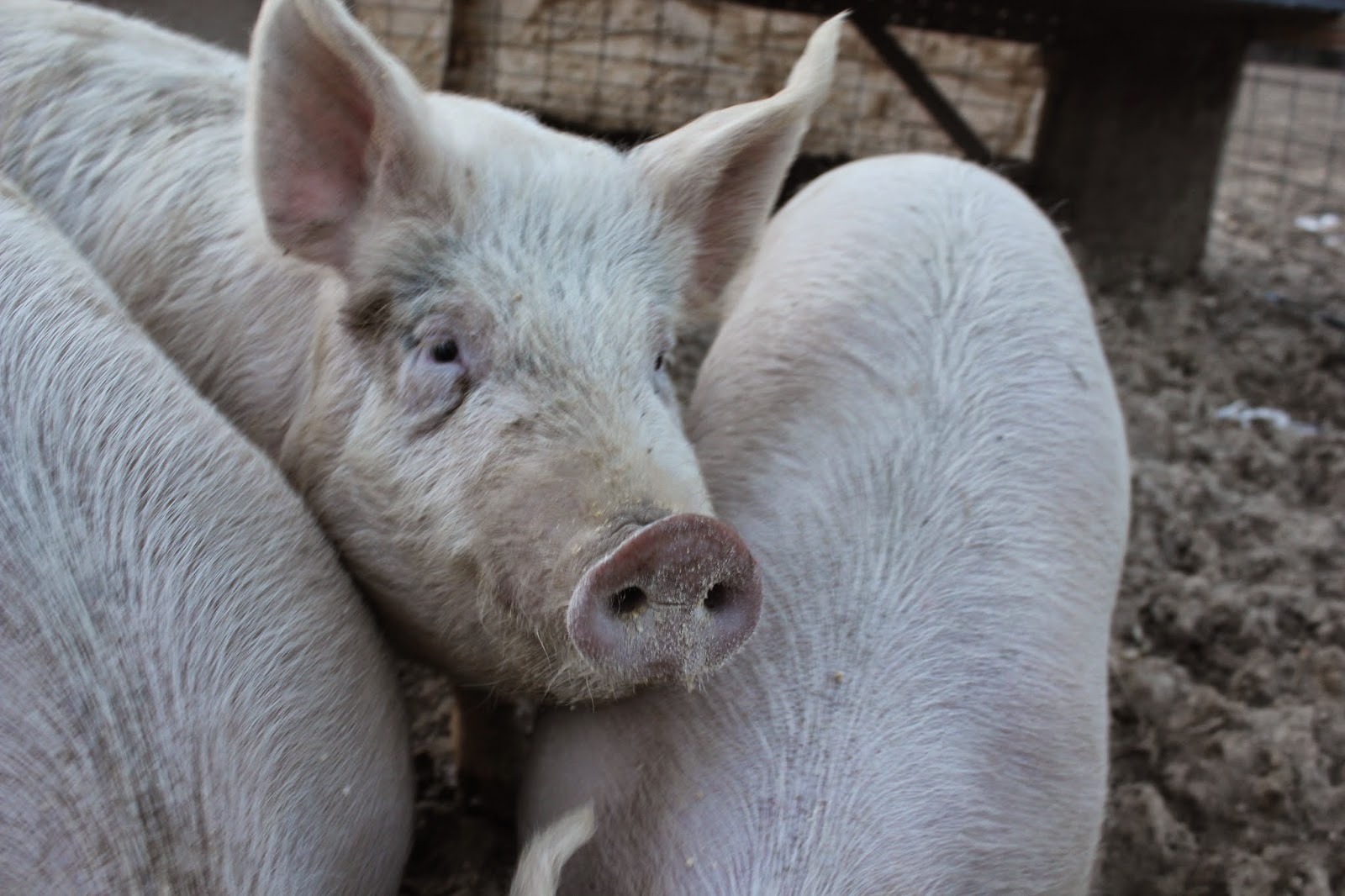 Pigs do have that magical ability.... They can turn vegetables into bacon!


There are multiple family conferences these days as I dream and plan and they (mostly Paul) try to dissuade me from taking on too much.  My DH is supportive of my ideas so I try to use common sense and not take on too many new projects, albeit, more than Paul thinks I should.  Our goal is to raise really healthy delicious, nutritious food for ourselves, and have enough left over to sell to those looking for similar things.  We have to make enough to cover our expenses and a bit for labor.  The farm can't be a charity.  We are working hard to do a better job keeping track of our expenses this year so that we can see how we are doing.


We have enjoyed a very healthy winter.  We are all outside a lot!  Elizabeth is the child who never seems to get cold.  She rarely has shoes on her feet, unless there is a lot of snow.  Even then she often has only crocs on and no socks underneath.  Brrr.  She and T-Bob were outside sledding behind the ATV when it finally warmed up to 8 degrees.  They don't seem to feel the cold.  They have definitely embraced being country kids.

The chickens seem to be managing well in the cold.  I see a little bit of frostbite occasionally on their combs but nothing very significant.  The chicken tractor seems to be warmer than the run-in coop.  These chickens won't come outside unless it is above freezing.  The run-in chickens are outside everyday.  They have a protected area in the run-in that they take their dust baths and enjoy the afternoon sunshine in no matter how cold it is.  They have been laying better also than the tractor chickens.  We love our eggs with their orange yolks, even in the middle of the winter!!!


We have thoroughly enjoyed the meat from our broiler chickens.  We have already ordered our next batch which is supposed to arrive in the middle of March.  The broth from these birds is "oh so good"!!  They were a big success in our first year of farming!


As I close this post, I thought I would also update what is going on in our lives.  I never did get a Christmas letter out this year.

JoAn would appreciate prayer as she is in a VERY busy time of life.  She has her normal job doing all the financial stuff for a local Christian school, and she also decided to do another year at H&R Block.  She is very busy with her other activities as well... She teaches at AWANA on Sunday nights, heads up a girls Bright Lights group,  and works with Paul teaching a kid's club on Friday nights.  She also is involved with a College and Career group on Saturday nights.  It is a very full schedule.  Fortunately, it only lasts until April 15th, cause we miss her!

Paul starts back to school on Tuesday.  He is studying Mechanical Engineering.  He is a very diligent student.  He works hard and does help out here on the farm.  He also teaches at AWANA as well as other responsibilities.

Michelle has been struggling with some health issues.  She is doing some better.  It is a process not an event.  She is working taking care of my brother's children 3-4 days a week at our house. That keeps her busy for now.

Thomas has been busy studying for speech and debate season.  He  was very pleased with his PSAT score.  He is starting to visit colleges.  He also has spent a lot of time playing basketball this winter.  He has really enjoyed it and has done quite well, especially for never having played before.  He has started every game on the JV team.  He has that unteachable thing called height in his favor.  He has a lot of decisions to be made in the next year.  He is leaning to preparing for a career in law.


T-Bob thinks that he should be allowed to skip debate and just play basketball.  That is not an option in our family. He has really worked on his jump shot and spends a lot of time practicing with the JV team.  He enjoys the extra time working on his skills and it definitely helps with his conditioning. But debate will go on.  Thomas has been tutoring him in good debate arguments. The boys' first Debate Tournament is in the beginning of February.  They are both doing sweepstakes in speech.  It is good to see them growing physically,spiritually and mentally.

Elizabeth is a sweetheart and is always a good helper.  She enjoys shooting baskets with the boys and crocheting doll clothes for her younger cousins' dolls.  She can butcher a chicken and she enjoys spending time with JoAn.  They have been working diligently memorizing the book of Proverbs together. 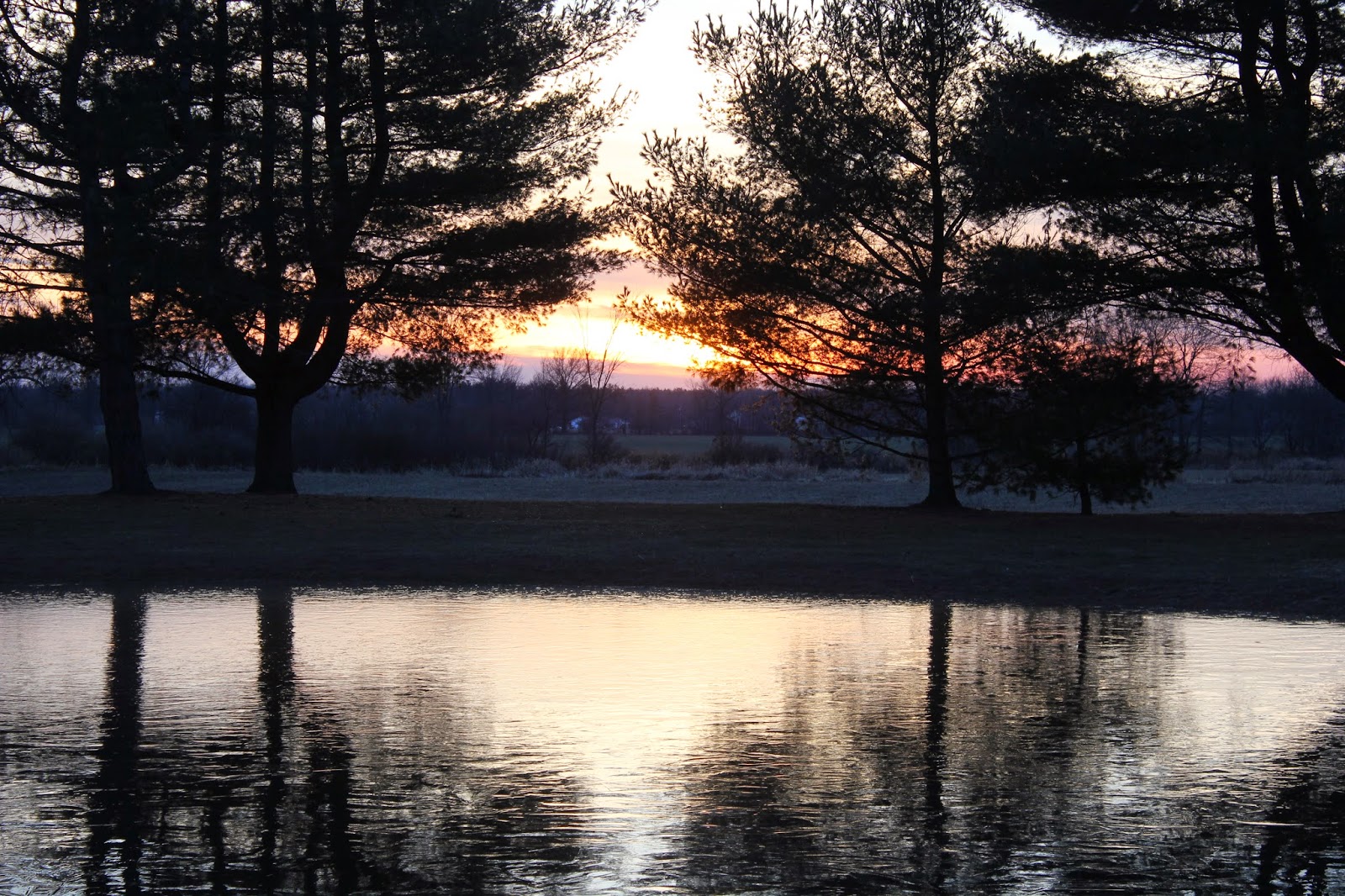 When we are home, we enjoy the quiet of the farm.  There is a sense of peace, whether we are inside or out.  We thank God for his faithfulness in every aspect of life.  Enjoy the quiet of winter.
Posted by ~The Mangos~ at 1:19 AM