Chicken butchering is a frolic at the Mango's house.  We invite friends and families over to help that enjoy fellowshipping and working.  Some of the families are interested in homesteading, others just want to have the experience to cross off their bucket list.

Here is our second go round with butchering broilers.

This post has very limited blood and guts, and should be viewable by those with even the most squeamish stomach. 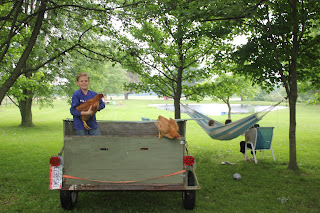 Our first butchering party was last November.  It was a very cold snowy day.  Not so this time.  The weather was perfect,  Not too hot and not too cold.  It was about 73 degrees with a light breeze.  We had no issues with flies or mosquitos.  The boys went back in the trailer to load up the broilers.  We did have more of a problem with broiler escapism.  That may have been operator error.  I think the boys were having a really good time trying to catch them.  Nobody escaped long term. 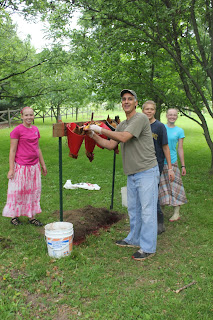 Usually the killing cones are manned by the young men with some adult supervision.  This time there were several young women who wanted to try their hand at it. 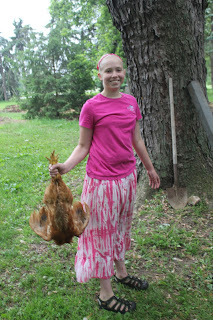 The chickens were taken from the killing station over to the scalding station. 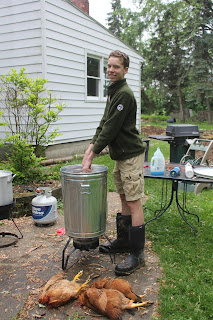 The water at the scalding station has to be 148 degrees plus or minus two degrees.  You leave them in just long enough that the feathers pull out easily.  Not long enough or too long and the feathers are hard to pull out and the meat on the birds starts to cook. This is a good job for those wantng to avoid the evisceration process.

After the birds are scalded they go into the automatic plucker. 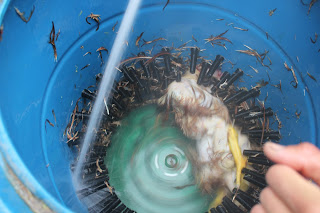 This is the inside of the plucker with two birds in it.  The birds are tumbled in there for about 45 seconds. The water from the hose washes the feathers out the bottom. They come out clean as a whistle. 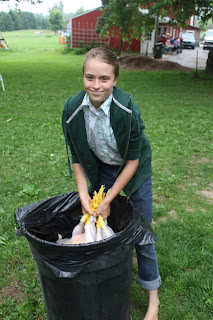 The birds are put into ice water to start chilling until the next station is ready for them. 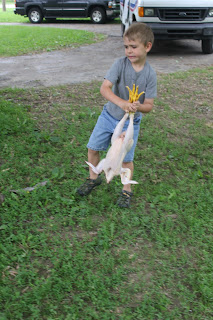 Even the little guys were put to work, or allowed to help, carrying birds from the ice water to the next station. 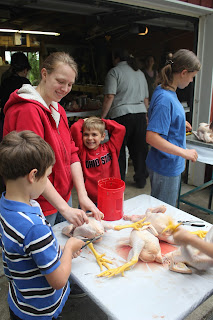 The next station was where the birds were checked over and any feathers the plucker missed are removed. 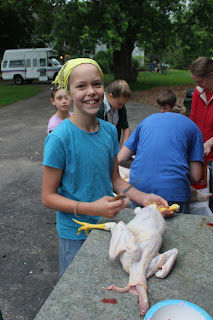 Elizabeth was the surgeon who amputated the feet and the oil glands.  When she was done the birds went to the eviscerators. 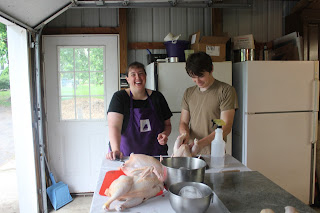 All the novice participants were instructed in eviscerating the birds.  It is a big job and all the help is very much appreciated.  These tables were filled with chatting people, having a good time.


The next stop was QC or quality control.  That is where the birds are checked over a final time to make sure all the feathers are removed and all the little bits and pieces are removed from the insides.  JoAn organized and ran this part.  Then the birds are weighed and assigned a number.  The number is rubber banded to their leg. This information is then recorded on our computer. 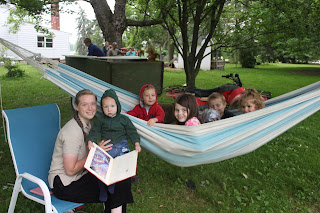 There were lots of young children that required supervision.  The older girls took turns watching them and making sure they didn't get into trouble. 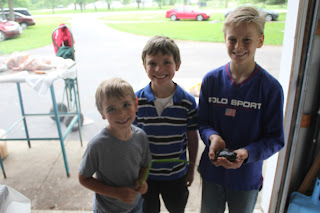 The younger guys went frog hunting when they were done with their chicken jobs.  The young people also got a nice kickball game in after lunch.

Here are our final numbers...

We started off with 101 freedom ranger broilers.  We butchered at 10 weeks of age and we had 96 birds at that point ( 2 died when a child dropped a board on them, one was harassed by the dog. one just died randomly at the end and I can't remember what happened with the other).  The average bird weight was 4.5 #.  We paid $1.55/chick.  We fed them Non GMO feed and we purchased chicks that were from parents that also were raised on Non GMO feed. We calculated our total cost, without labor, at $1.96/#.

Our next batch of broilers will be arriving at the end of the month.  We are planning on butchering the next batch on Labor Day.  Let us know if you want an invitation to our frolic.