It seems like, often when my DH goes away we have major or minor crises here at home. This year he went and helped his parents move from Arizona to New Mexico, to live with one of his sisters. And what happened here on the home front? A big time wind storm! It kept most everyone awake all night as winds of 60-70 MPH buffeted the houses and trees. We have lots of big trees in our area, and now we have a few less. The house seemed to vibrate in the wind. Things were hitting against the siding and things were bouncing around in the yard. We couldn't wait for the morning. What had happened during the night ....? 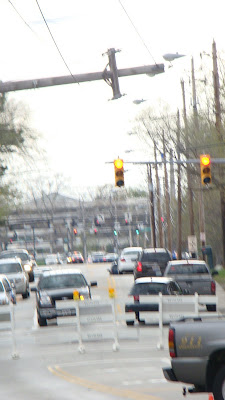 The story I heard was that the night before a police car hit this telephone pole. Nothing seemed to be wrong so they didn't do anything with the pole. Then the wind hit... and the pole bent over in the middle. The only thing that kept it up were the wires. It was suspended over the road. The police directed the cars around it all day. As evening came, a concerned neighbor started worrying about what would happen if it started blowing again or if the wires broke. 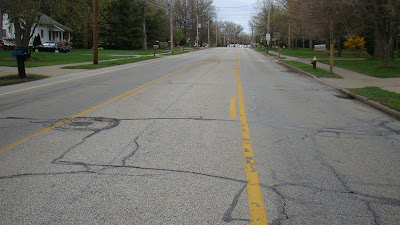 So they closed our BUSY road! It was really nice to have a quiet street. The children went out and played in the middle of the road just to say they had done it. T-Bob and his friend were even doing chalk drawings in the turn lane. 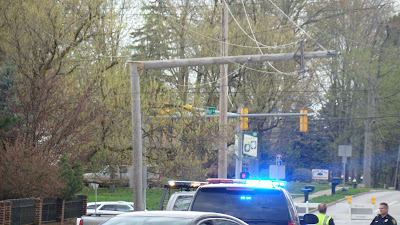 The police stayed around until they turned our electric OFF. Then it was very dark and quiet. No street lights or cars. It felt like we lived out in the country. Pretty nice. 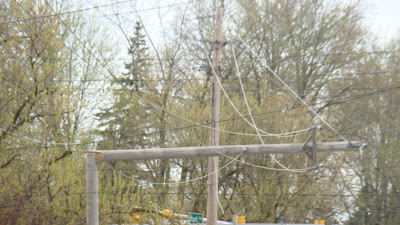 We had our power and phone off until Saturday morning. Fortunately, it wasn't real warm outside and we had a generator to power the fridges and freezers. In the evening we went over to the neighbors and enjoyed a bonfire. It was the only light in the area. It is always good to meet up with the neighbors after a winter's seclusion. Even on a busy city street, We have a neighborhood and watch out for each other. 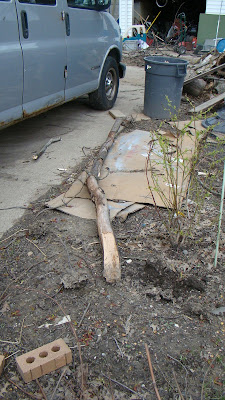 Here is some of the other things that happened in our yard from the wind storm. This relatively big branch broke out of a tree and just missed my DH work truck when it fell. It also missed my blueberry bush. This was less significant, but I still appreciated it. During the wind storm I really did pray that nothing would hit the truck. 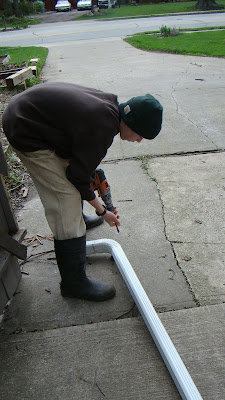 We also had a long section of downspout blow off the side of the house. Paul put it back up immediately. He is Mr. Handy for sure. No waiting around for his Dad to come home.
Nothing like a good adventure to make life interesting.
~Mom
Posted by ~The Mangos~ at 4:13 PM