Our Day in Amish Country

Many of you may not know that I am a  chiropractor and nutritionist.  I also do a lot of work with neurologically injured children.  The injuries can be from birth or genetics or trauma.  I also work a lot with pregnant mom's.  One part of my job is to make house calls in the local area with lots of Amish. 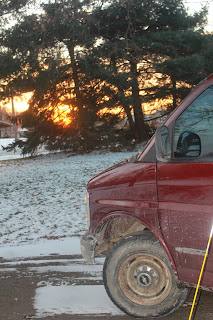 I usually go on Fridays and try to leave early.  We take the Big Red Beast and pick up groceries along the way plus whatever else we need.  I get most of my things direct from the farm. 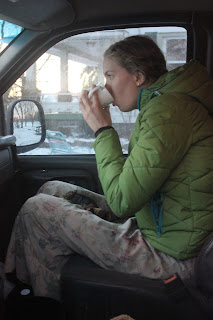 I always take at least one of the older children along.  When they were younger I used to take all of them along.  That is where we got our first interest in farming and learned a lot of basic skills.  The kids have gotten to help butcher, gather sap from maple trees, cut ice from the pond,  milk both goats and cows and many other things.  Now they have other things they would rather do than ride around in a car most of the day.  I don't really blame them.  I have gotten a lot busier through the years and many of the stops don't have anything for them to do.

I have gotten to know many amish families well as well as having gotten to know their culture and even a bit of their language.  Amish children don't learn much english until they go to school.  If I want to talk to them I had better learn a little 'Dutch'.  I work primarily with children down there.  There are a lot of genetic problems because of the small gene pool that they marry from.

I find that many people are fascinated by the amish and their lifestyles.  I have opportunities to be in their homes and on their farms. I have gotten to know a lot about them. I thought I would do some blog posts on the different kinds of amish and how it impacts their life.  In our area of Ohio there are five different types if amish.  Starting from the most conservative they are the Swartzentrubers, Dan, Old Order, New Order, and New New Order.  Some people call the Newer Orders the "tractor Amish".  If you read through this series, you will be able to go to Amish country in Ohio and meet an Amish person or look at a farm and know what kind of Amish they are.

If you want to know anything specific, just leave a comment and I will try and answer it.  The largest group of Amish in Ohio are the Old Order.  They are the group that many people think of when they think of Amish.

The Amish lifestyles are very varied.  Many of them no longer live on farms and farm.  They have wood shops, do cement work, and any kind of carpentry.  They run shops and are always very thrifty.  Forgive me the stereotype, it doesn't cast any of the groups in a negative light,  Q: Do you know the definition of an 'Amish Man'?

A: He buys from a Jew and sells to a Scot and makes a profit.

There are huge differences in the lifestyles of the different amish groups. They range from the Swartzentrubers who still live like the days of "Little House" to the New New Order who live just like you, except they still drive a horse and buggy. We will look at some of the distinctions in future posts.
Posted by ~The Mangos~ at 7:30 AM