The Busiest Saturday of the Year 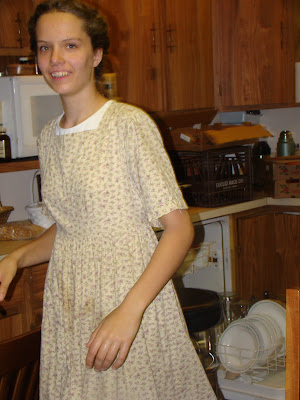 This Saturday was our big Food Production Saturday. I had wanted to get food put away for winter earlier in the summer, but all our busyness and a couple unmentioned circumstances prevented it. I was really feeling discouraged about that. Friday night, after a busy day in Amish country, I stopped at the Amish produce auction on the way home. The children and I spent about 3 hours there and we were able to get a lot of the things I wanted to put away at a really good price. It was my first experience at bidding at a live auction. I had fun. I overpaid on one batch of tomatoes, but did great on everything else.
JoAn is our kitchen organizer on these big cooking days. She is a champ! 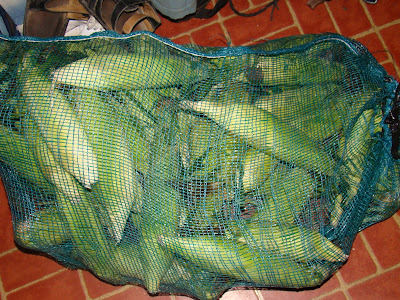 Saturday morning found us looking at 10 bags of 5 dozen ears of corn. That's more than we usually do, but that was the size of the lot I bought. ($4/bag). 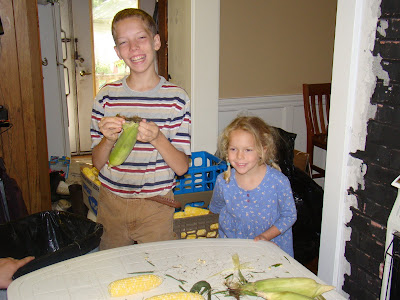 The children all helped with the husking. We opted to do it in the kitchen rather than outside because the yellow jackets come so quickly and start annoying us. Elizabeth took the husked corn and put it in coolers and boxes for us. 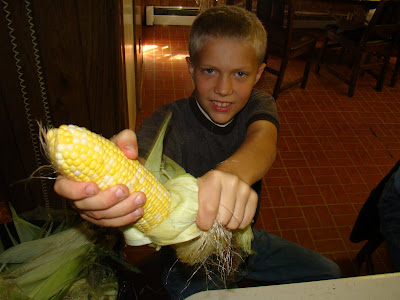 T-Bob helped with our inside and outside work. The corn was beautiful and not starchy. 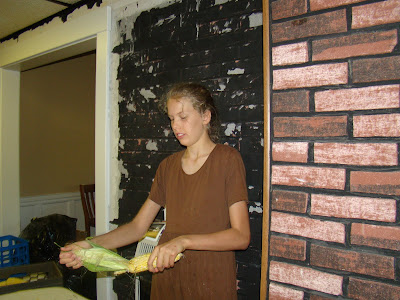 Michelle was our inside and outside helper girl. 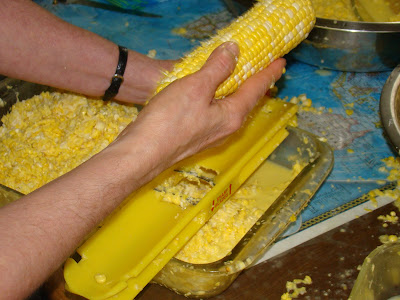 My friend Kathy M. came over and helped me cut it off the cob. This is a huge job, especially when you have 600 ears to do! JoAn blanched and iced the corn before we started cutting. It took 3.5 hours to get it all cut off. I even had to ask The Boss for help on the last 50 or so, my hands and arms were just too tired. 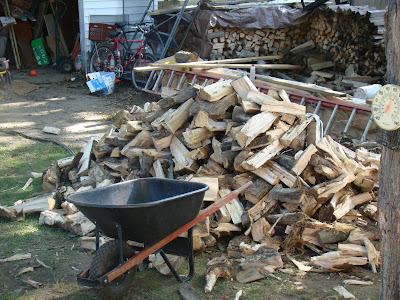 While the inside crew was putting food away for the winter, the rest were busy stacking firewood. This is the pile after more than half had been stacked. Mr. Boots and T-Bob had stayed home on Friday to split it all. We still have about the same amount of wood needing to be split and stacked. We need about 7 full cords to last through the winter with our two wood stoves going almost constantly. 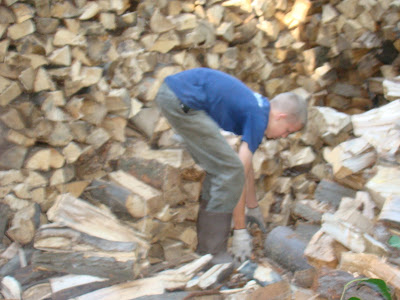 Mr. Boots was the chief stacker. Others brought the wood over in the wheel barrow. T-Bob and Michelle did help a little with the stacking. If you look close at the picture you can figure out where 'Mr. Boots' got his nickname. This is his normal outfit. 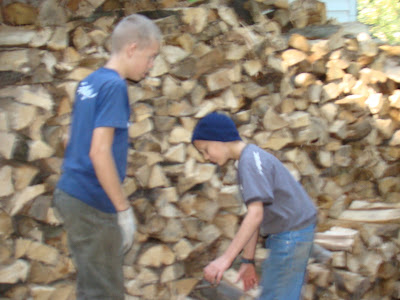 It was good to see the brothers working together. Meanwhile, in the kitchen the three+ bushels of tomatoes were cut up and cooked along with onions, garlic, celery and bay leaves. Mom did the cutting and JoAn kept the process moving along. We run the cooked up mixture through our Champion Juicer. The broth we can and use as soup stock. 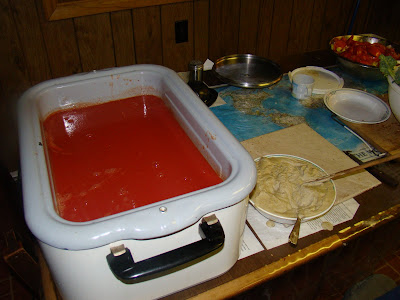 The sauce is cooked down in my Mom's electric roaster. Then we can that as well. That is Baba Ghannoush sitting beside the roaster. Michelle mixed that up for our supper. 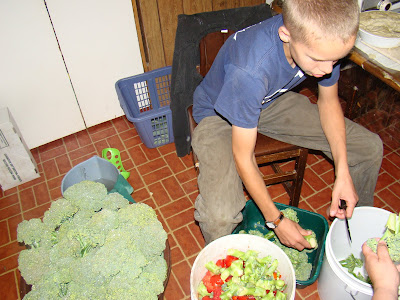 At the auction we got 5 bushel of broccoli. It was only $1.50 a bushel. I gave one to my friend Kathy and the rest we washed, cut up, blanched, chilled and froze. Mr. Boots did a lot of the cutting for us. By the time we started doing up the broccoli, it was dark outside. We had the outside helpers come back in the kitchen and help. We needed the help with the broccoli and the clean-up. 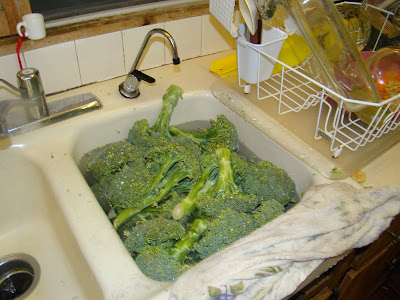 After it was blanched and chilled, Michelle and Thomas bagged it up.
I didn't get done in the kitchen until after 11. The boss came in and did the big push on clean-up. The rest of us were too tired to finish it up. It was a 14 hour day and very exhausting. It feels so good to have it all done. We still have some zucchini and eggplant to get done. I also need to get a couple bushel of beets in the freezer.
It was a family project and a job well done. A big thank-you to all my children and my dear hubby for helping so willingly.
~Mom
Posted by ~The Mangos~ at 6:34 PM