Burial in the Old West 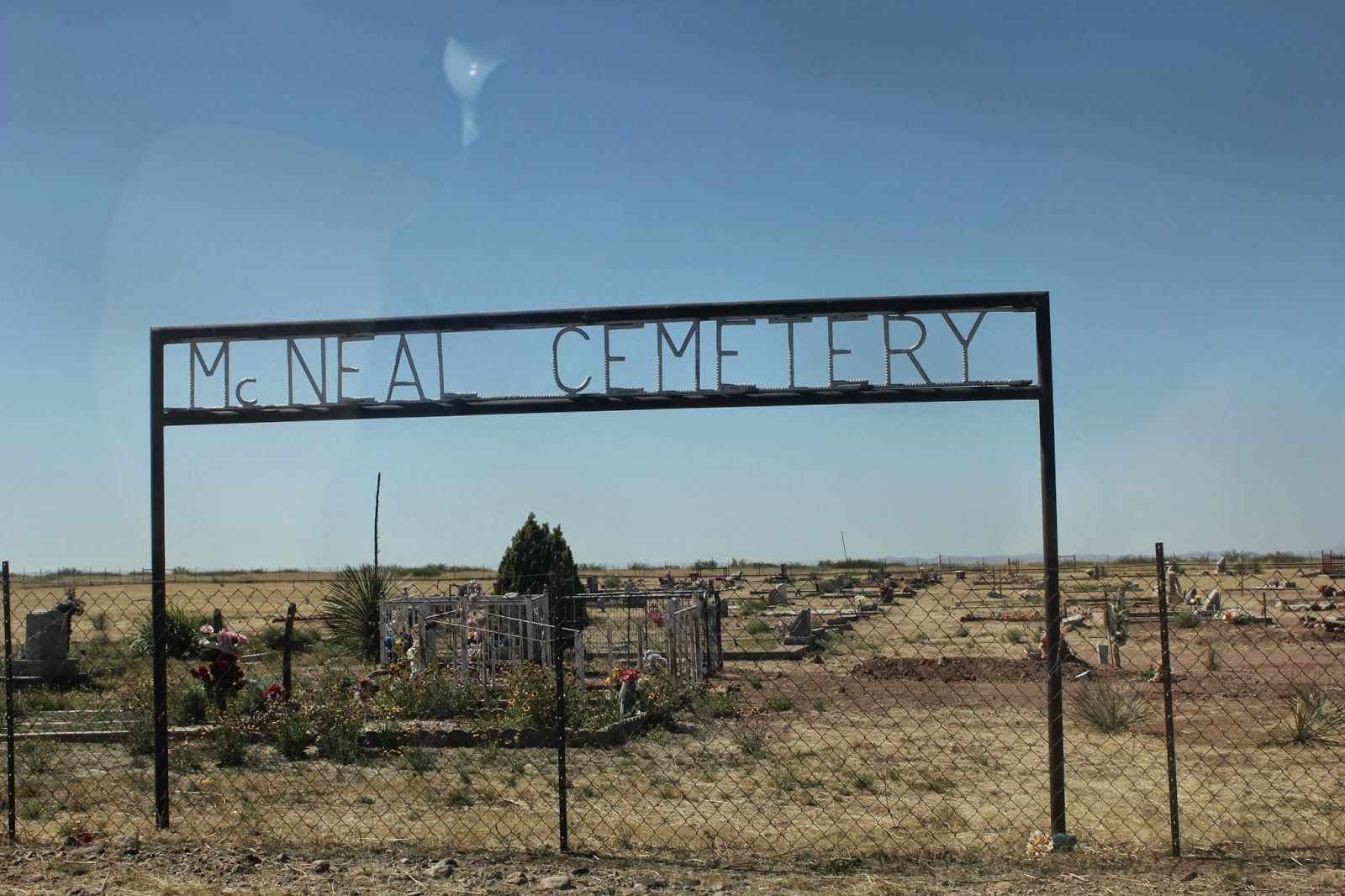 In McNeal, AZ there is a cemetery that was started 100 years ago by a 100 year old woman.  The cemetery is free to anyone who desires to be buried there from the area.  It has the feel of the old west.  It is several acres and it does have a part time caretaker who decides where people go. 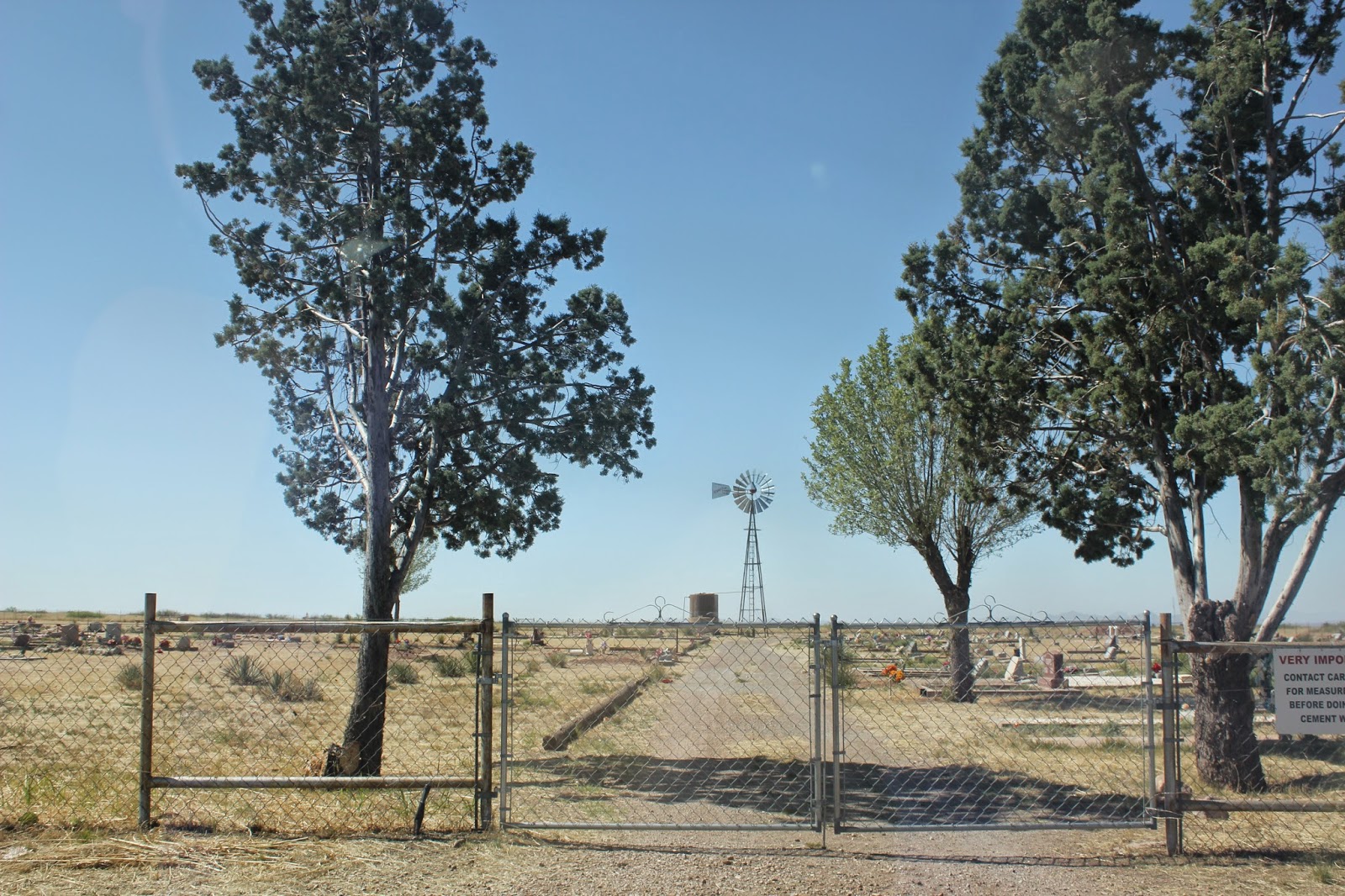 It is across the dirt road from the flight training base where my in-laws worked for many years.  It has an old windmill that is working and makes a clanking sound as the blades spin and the pump goes up and down.  There are two trees by the front gate and a couple along the main path.  It is peaceful.

The spaces are wide open and you can see the mountains in many directions.  It has the rugged beauty of the 'old west'. 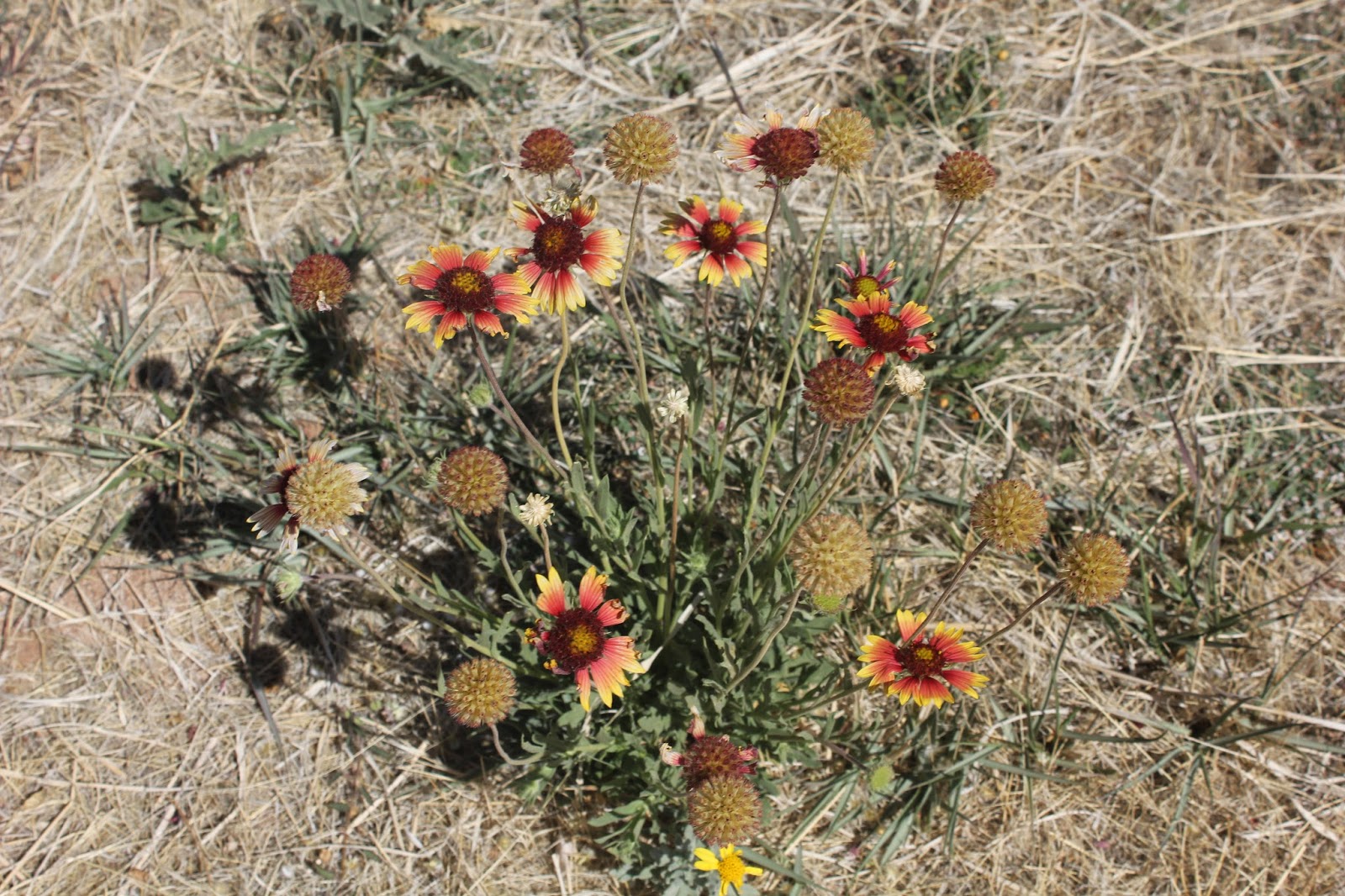 Wild flowers grow everywhere.  There is no grass as this is the desert. 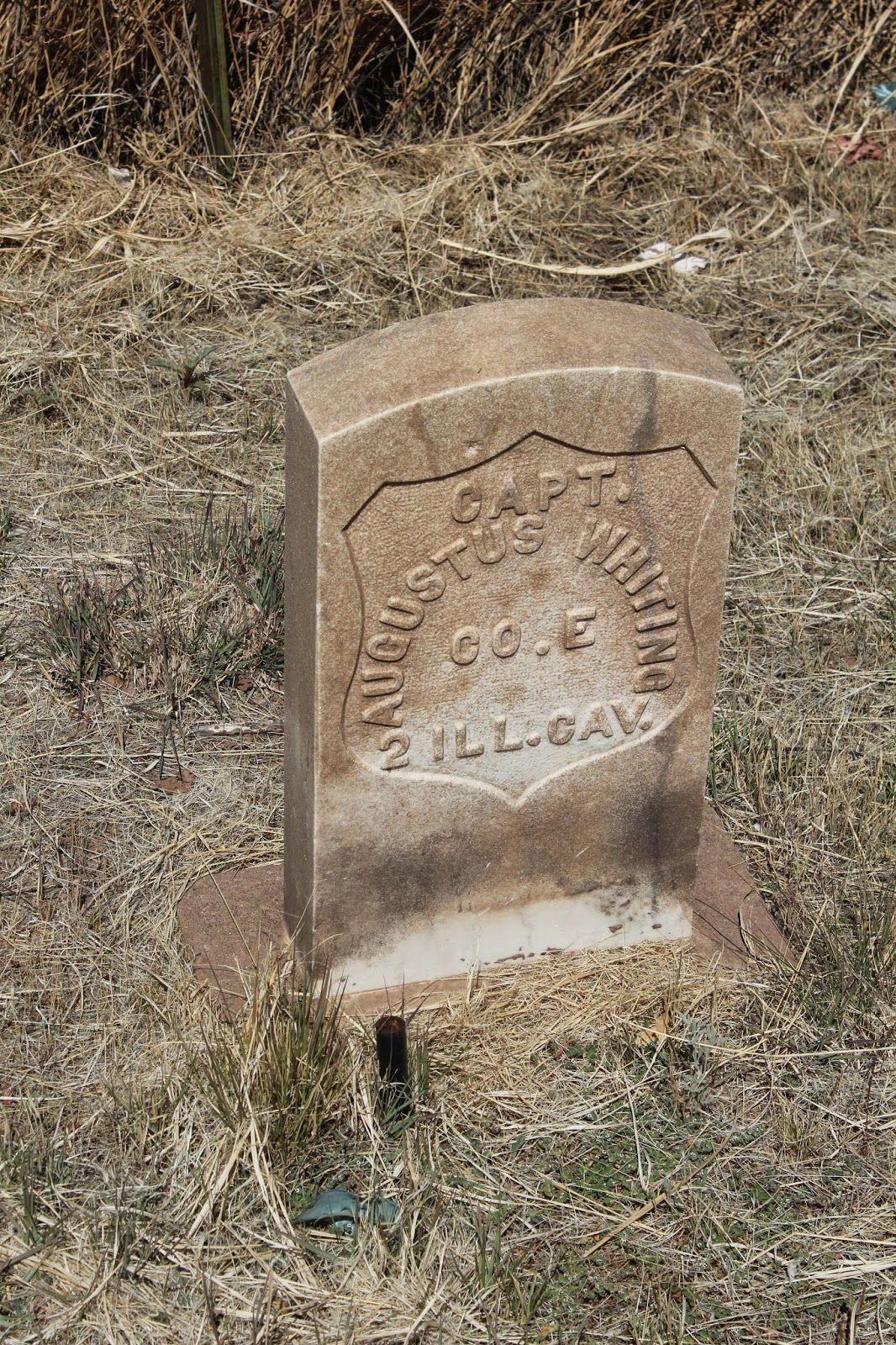 The oldest stone I found was put there in 1916.  There are many military men in this cemetery.  My Father-in-law was in the Air Force.  He joined just as WWII was wrapping up.  This is where Dad desired to be buried.

As this is a free cemetery, there are no services provided and virtually no oversight.  The family has the responsibility to dig their own hole.  My nephew Alex, a marine from Camp Pendleton did the duty.  It really brings it home to you,  when you have to dig and do everything as a family.  We had a lovely small grave side service.  The sun was beating down fiercely, so we had to keep it short.  It was a warm day! 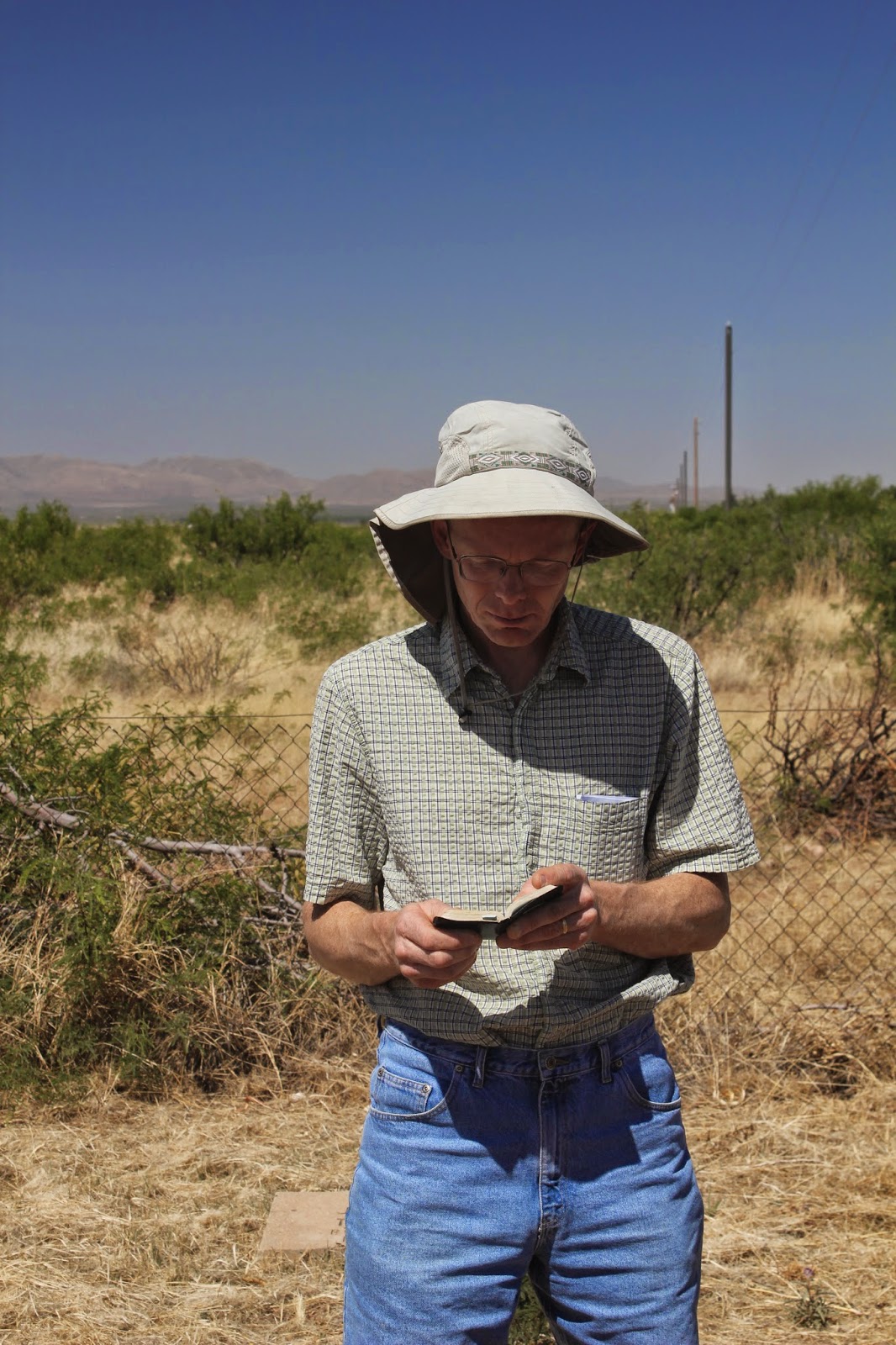 The service started off by my DH praying and reading John 11:23-26

Then Bob read  I Corinthians 15.  Steve, Mary, and Roger
prayed and we sang several songs.  Mom was struggling to stand in the hot sun and so things were kept short. 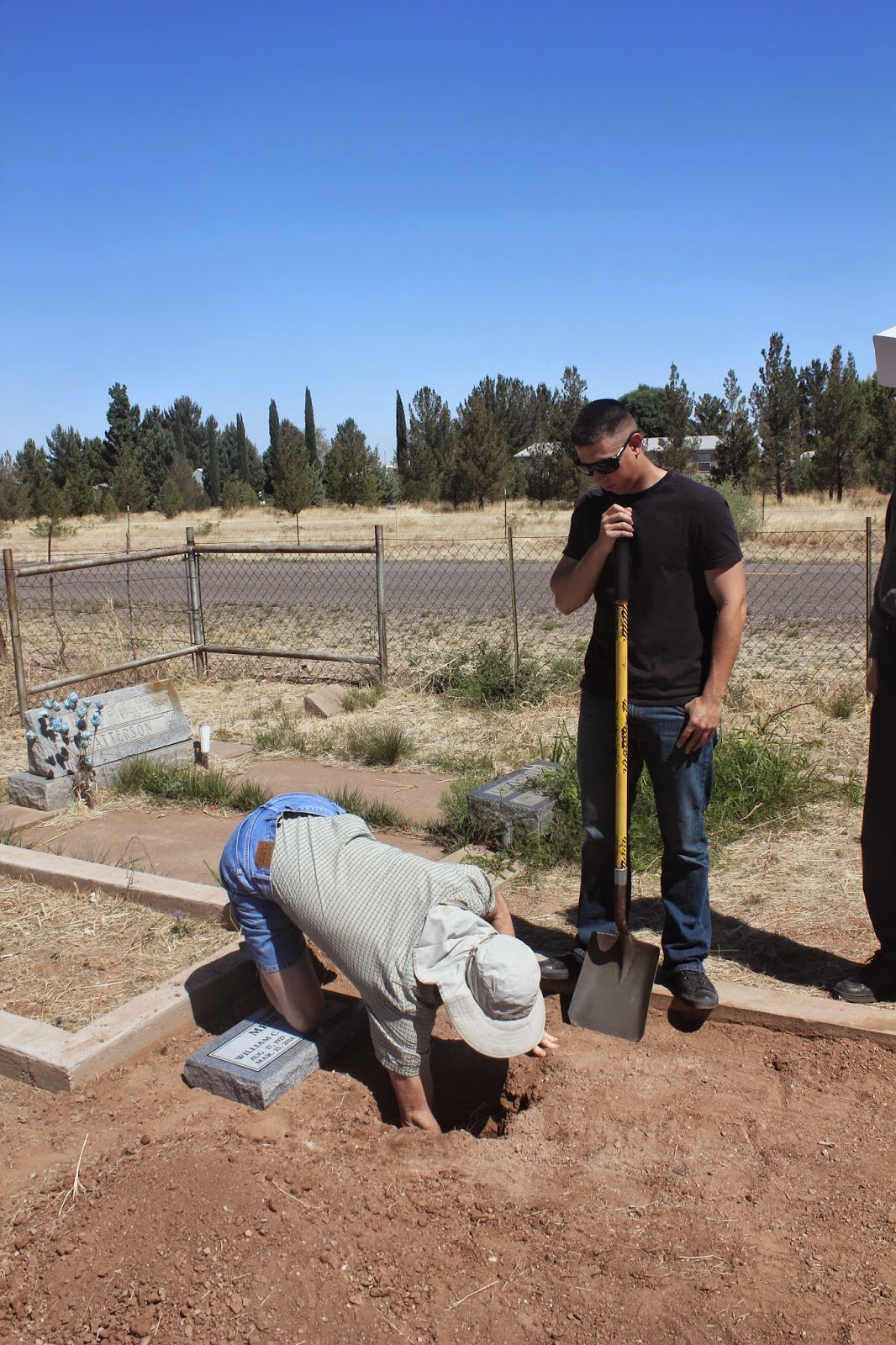 My DH gently placed his Daddy's ashes in the ground.  It was a very sober moment. 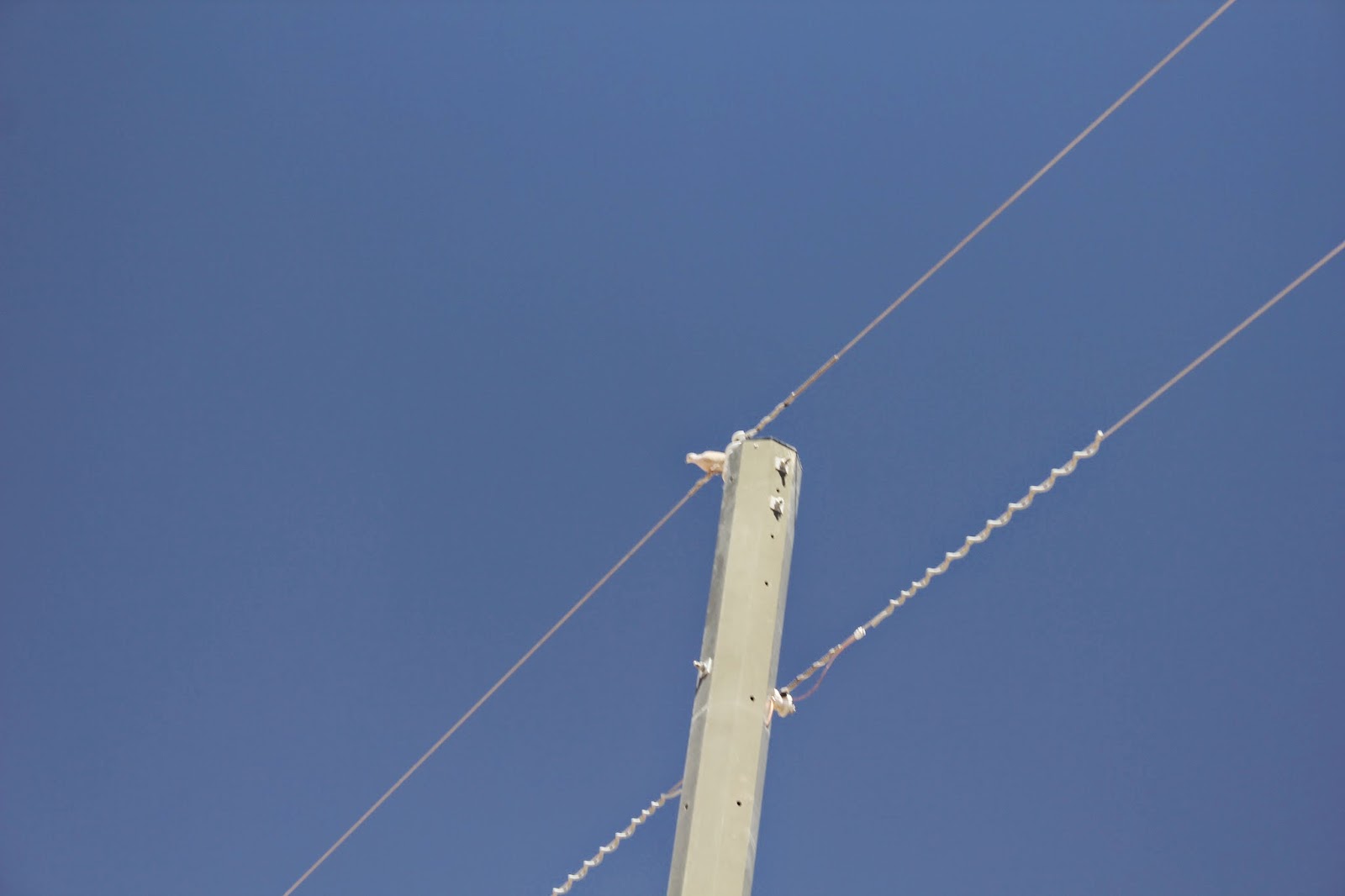 Interestingly, as he placed the box in the hole, a white mourning dove landed on the post overhead and began cooing.  It continued throughout the time the hole was being filled in.  Several minutes.  The last three years of his life, Dad lived in Las Cruces where the mourning doves coo non-stop.  It was very fitting. 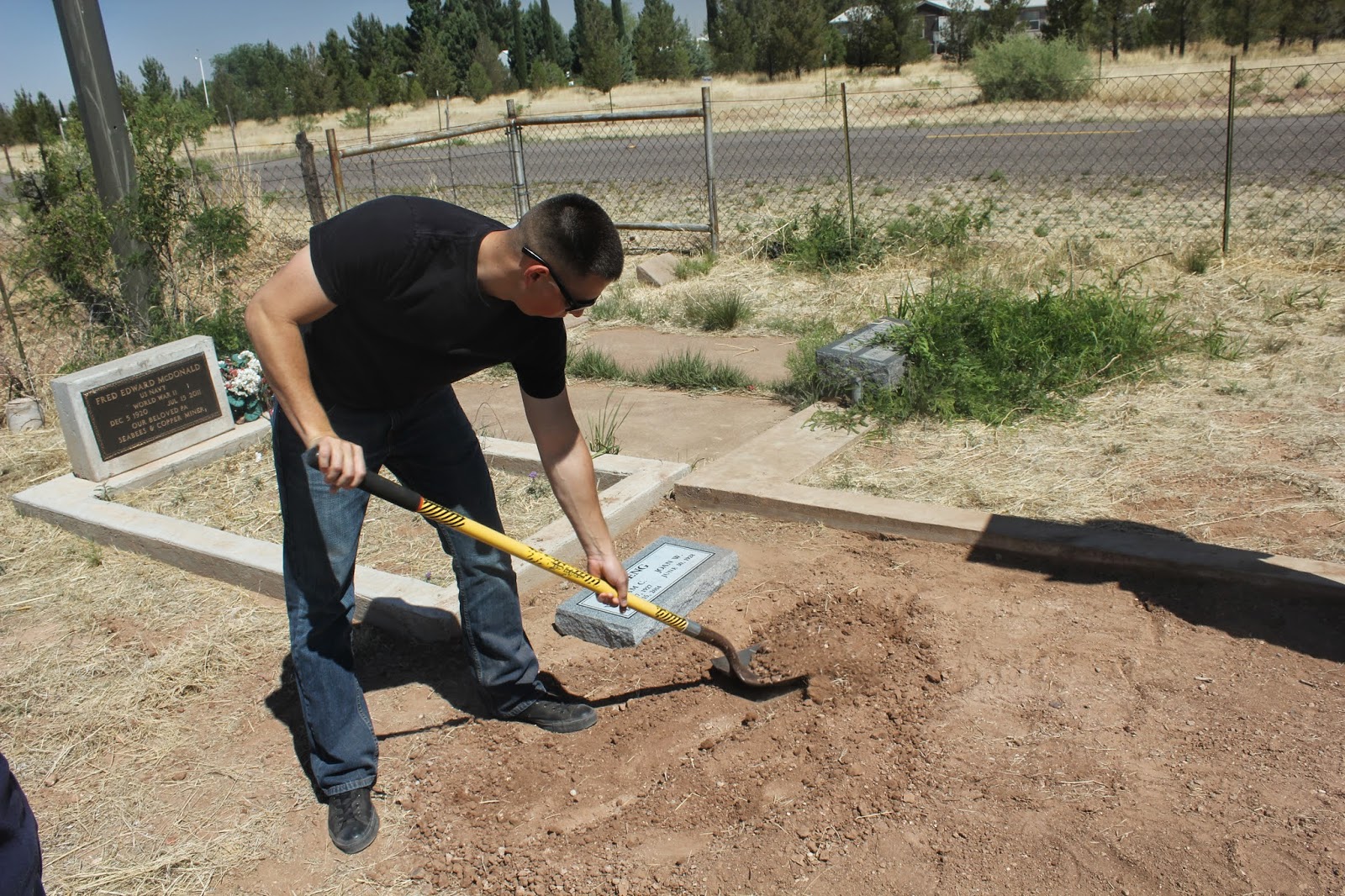 Alex filled in the hole and placed the stone. 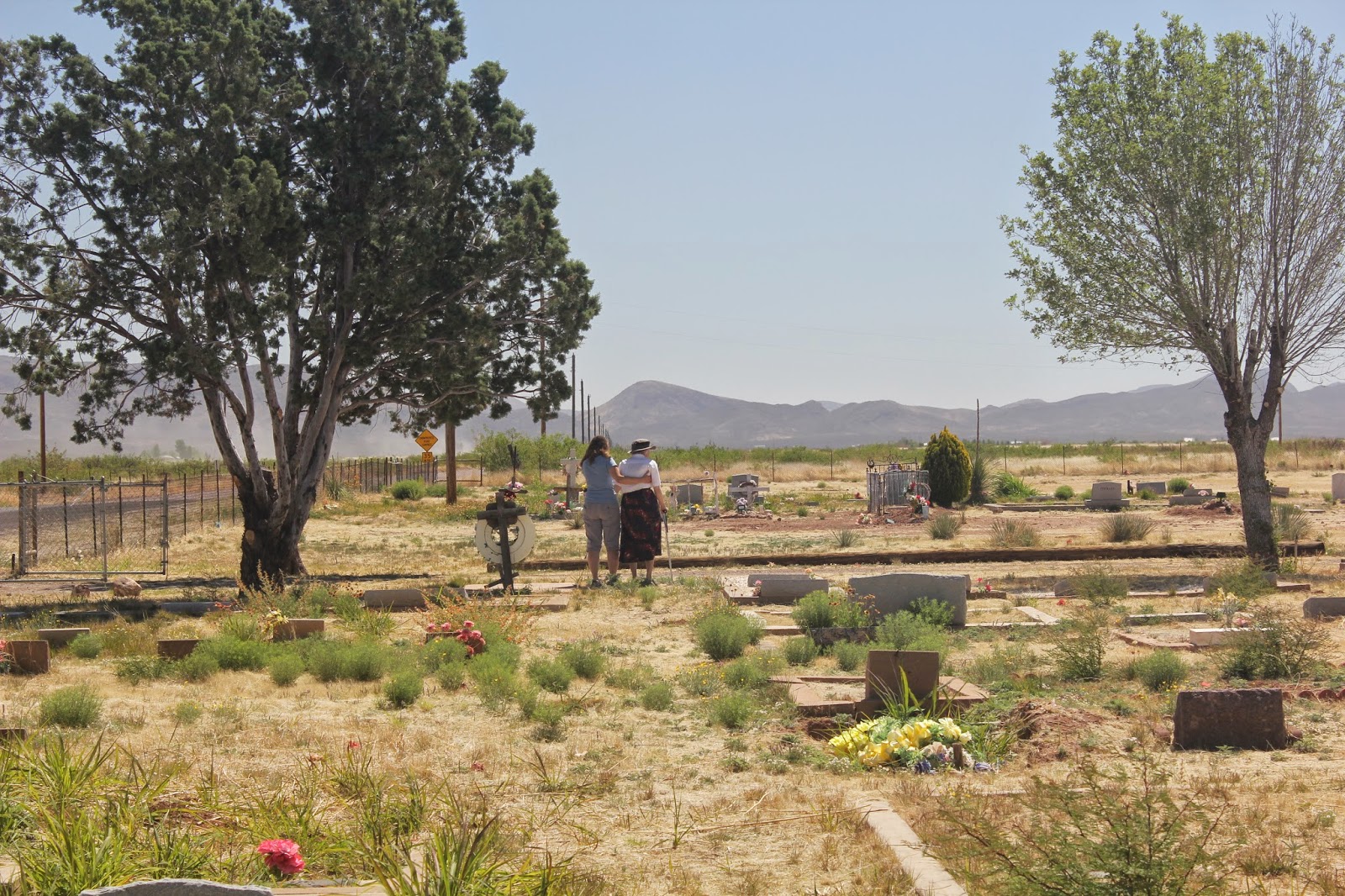 We quickly took Mom off to rest and recover for the remainder of her busy day. 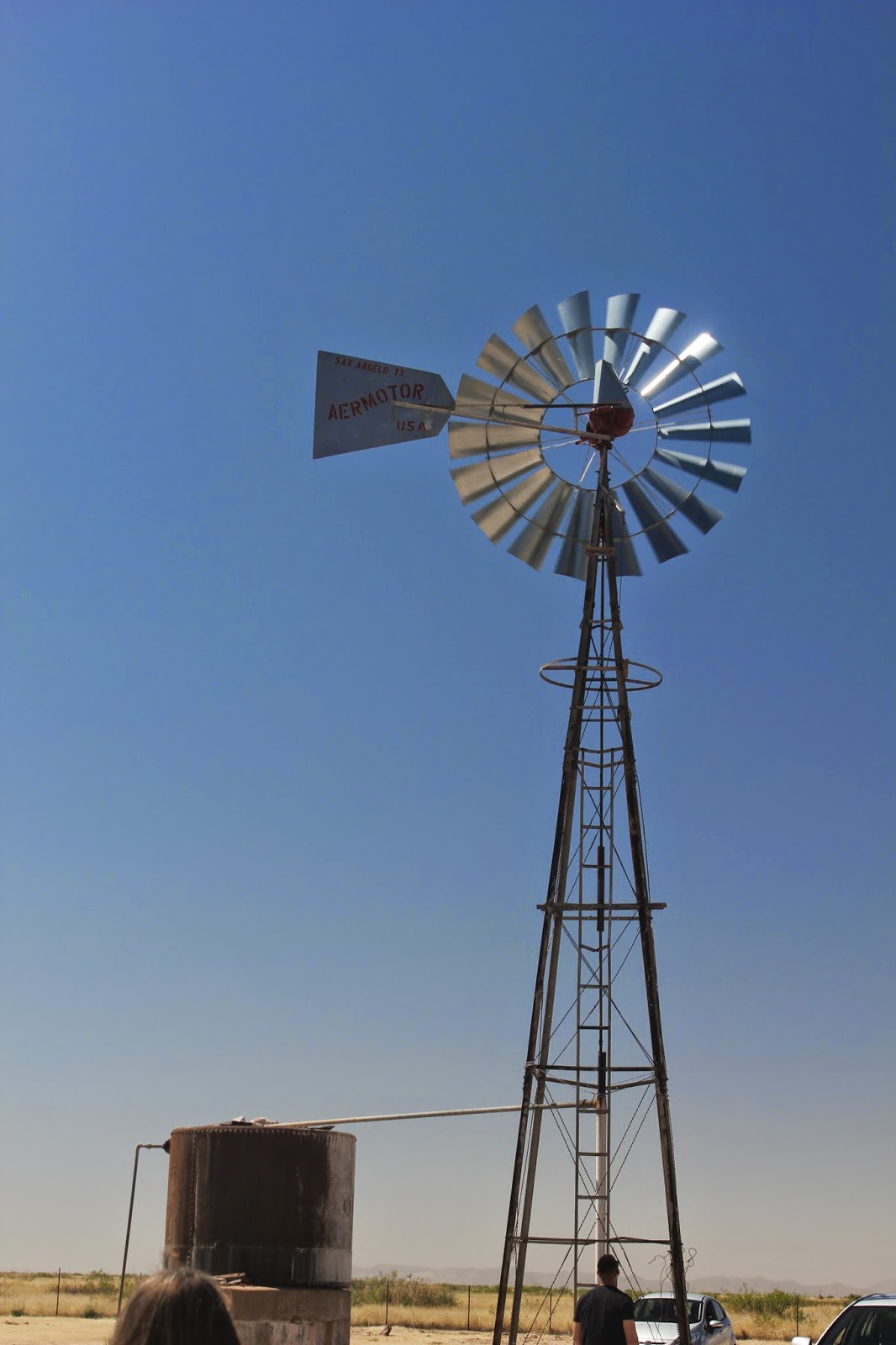 The windmill and tank in the middle.


Mary and I took a walking tour  of the graveyard.  It was fascinating to see the fences and cement barriers to define the grave sites. 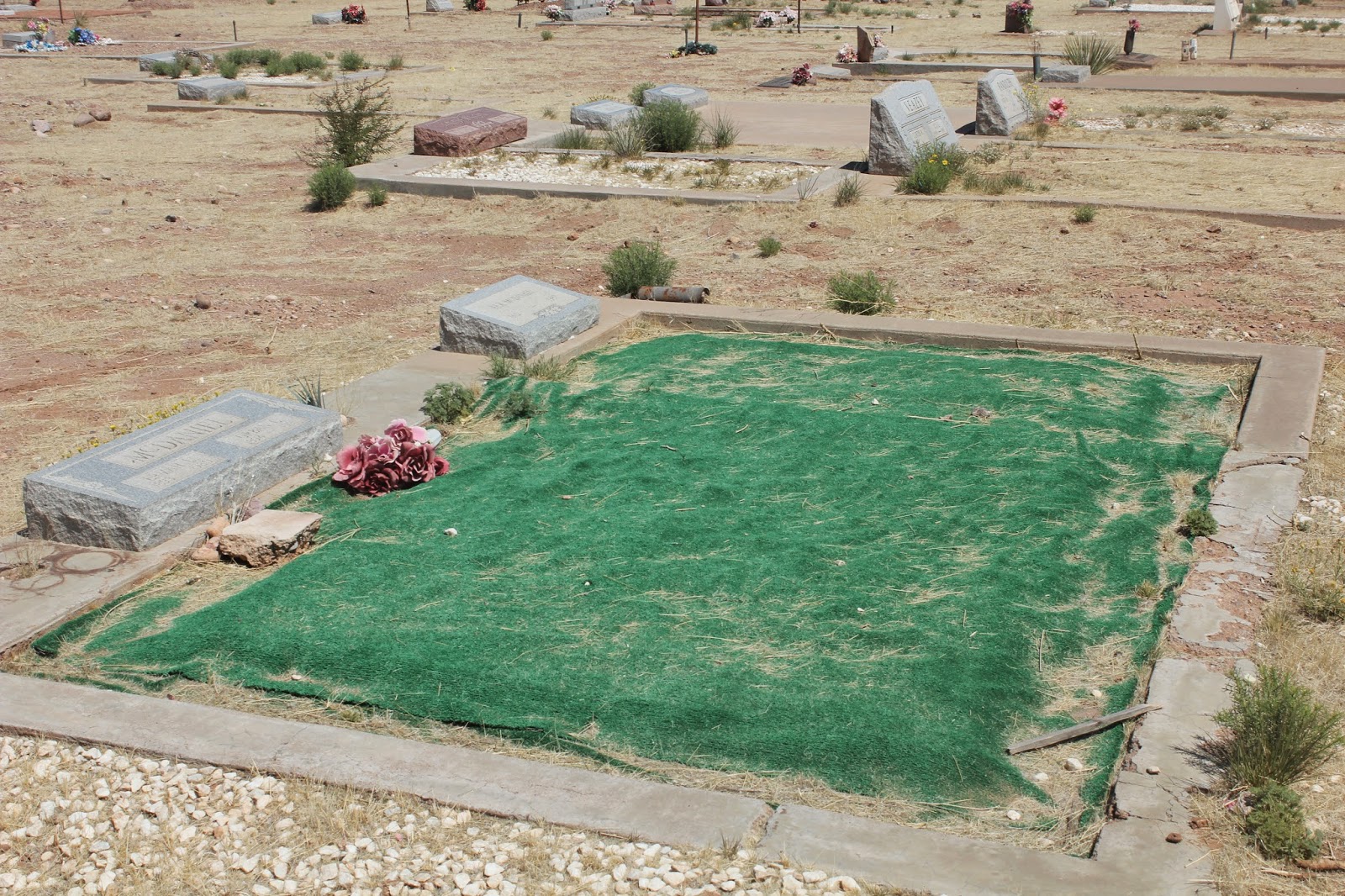 Some of the graves were covered by astroturf.  But over time the astroturf was eroded away and returned to a sandy brown.  I guess the scripture is true of even plastic grass... "The grass withers and the flowers fade, but the Word of Our Lord shall stand forever" (I Peter 1:24-25)


We had a lovely time as a family and enjoyed sharing memories.  Singing and praying together as we remembered Dad.  He was a wonderful man.  He had some idiosyncrasies that made him unique.  God used him as He made him.  A man who was faithful and fruitful and persevered until the very end. 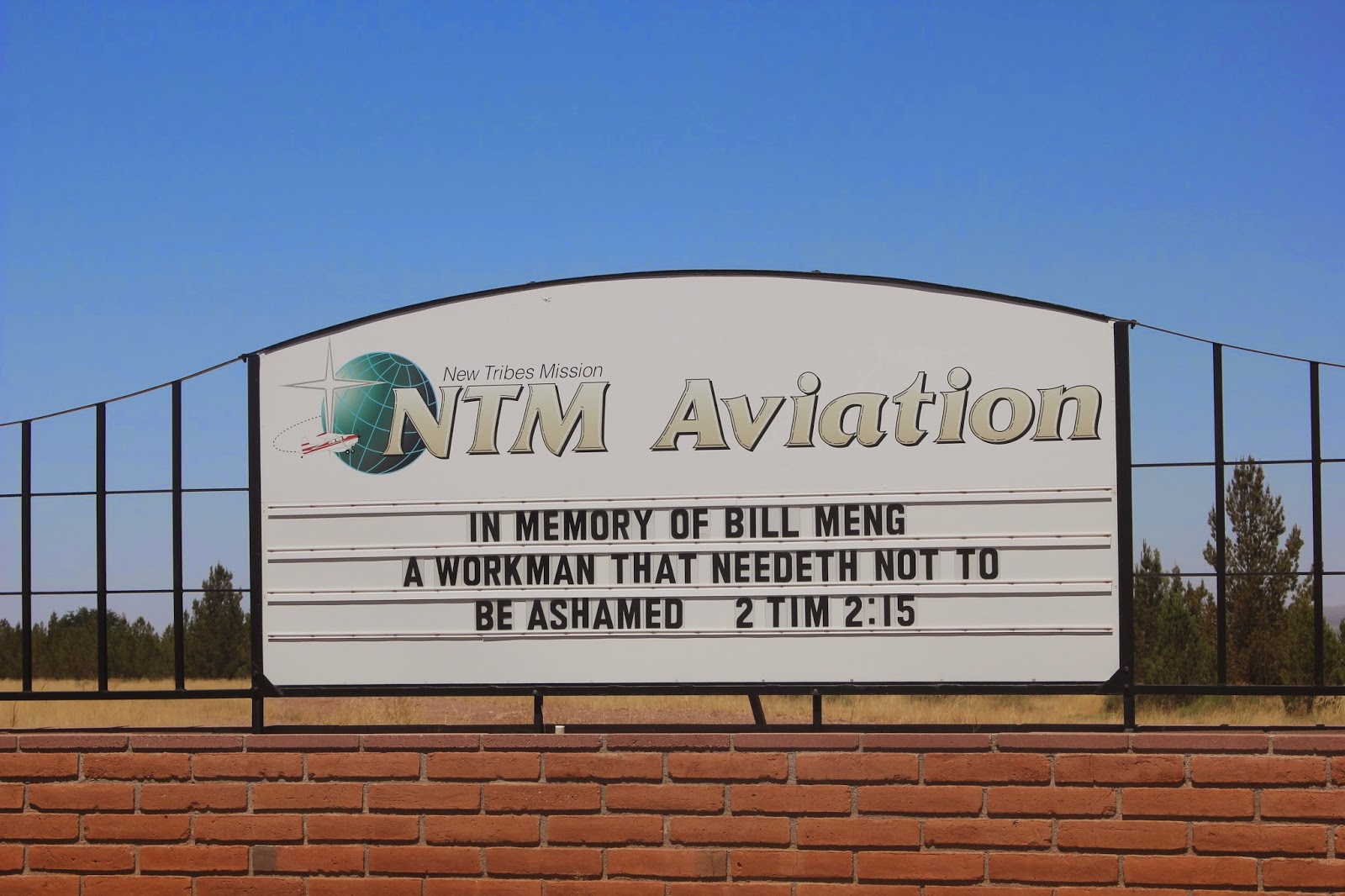