This Week in Review... 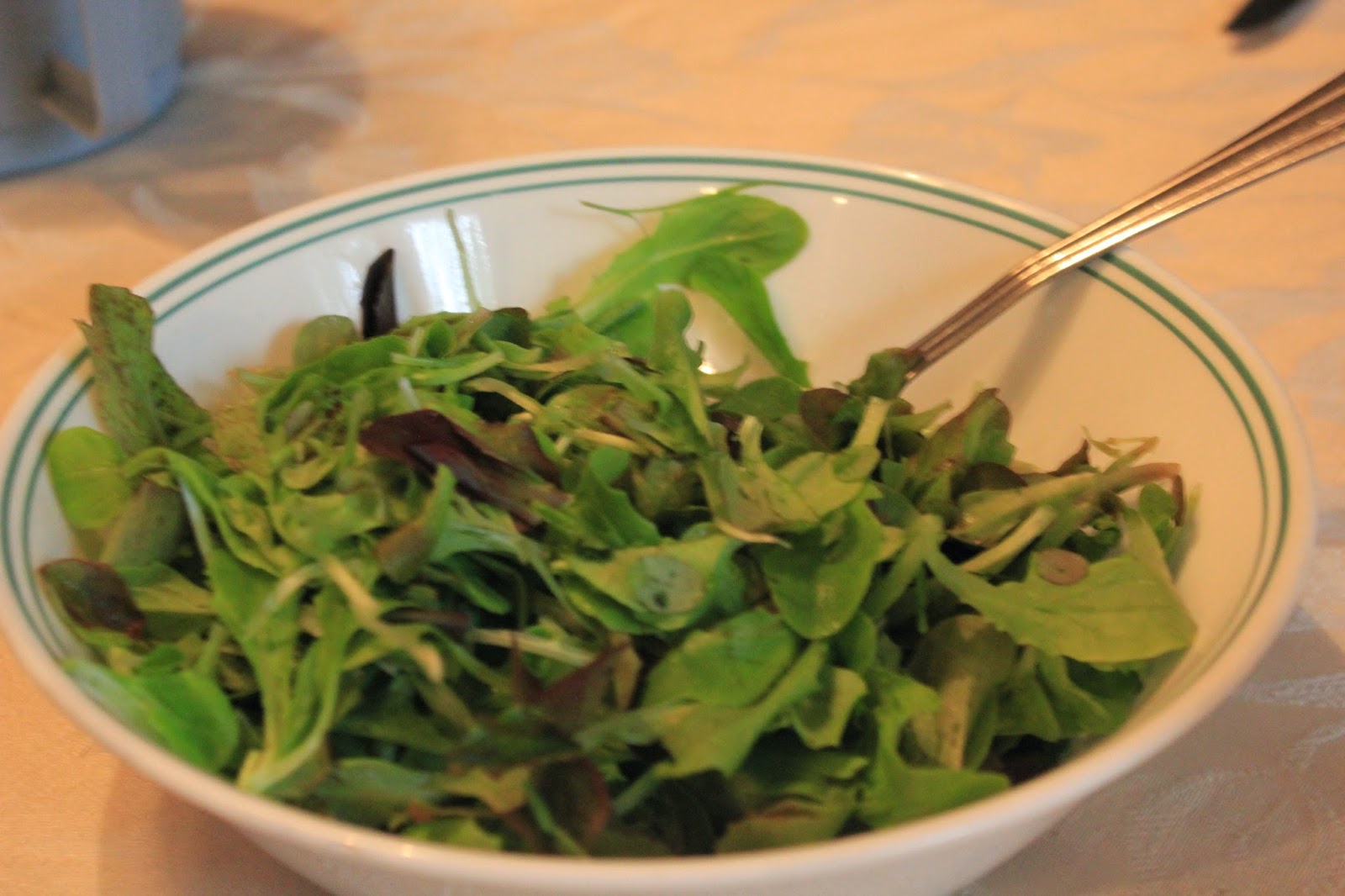 This week we harvested our first crop that we raised ourselves in the garden.  Fresh Greens! They were so yummy.  Sweet crispy and good!!  We really enjoyed them. 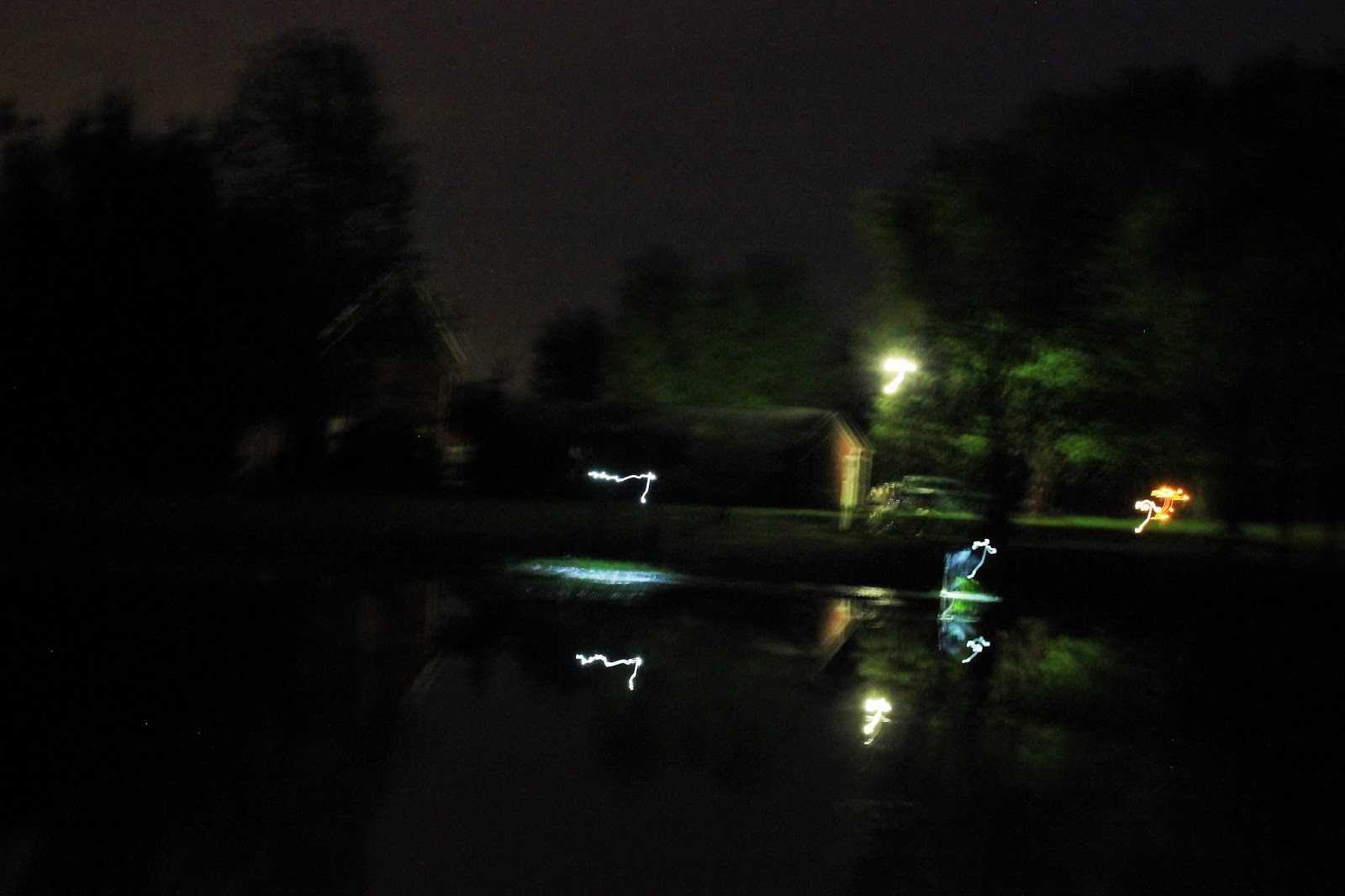 The weather was lovely this week.  We spent a lot of our evenings out by the pond.  My Sister-in-law Mary was here along with her daughter Karen.  What is there to do out by the pond?  Frog hunting.  Karen wore her rubber puddle boots and hiked along the edge and into the water to catch them.

Some of us enjoyed a campfire. 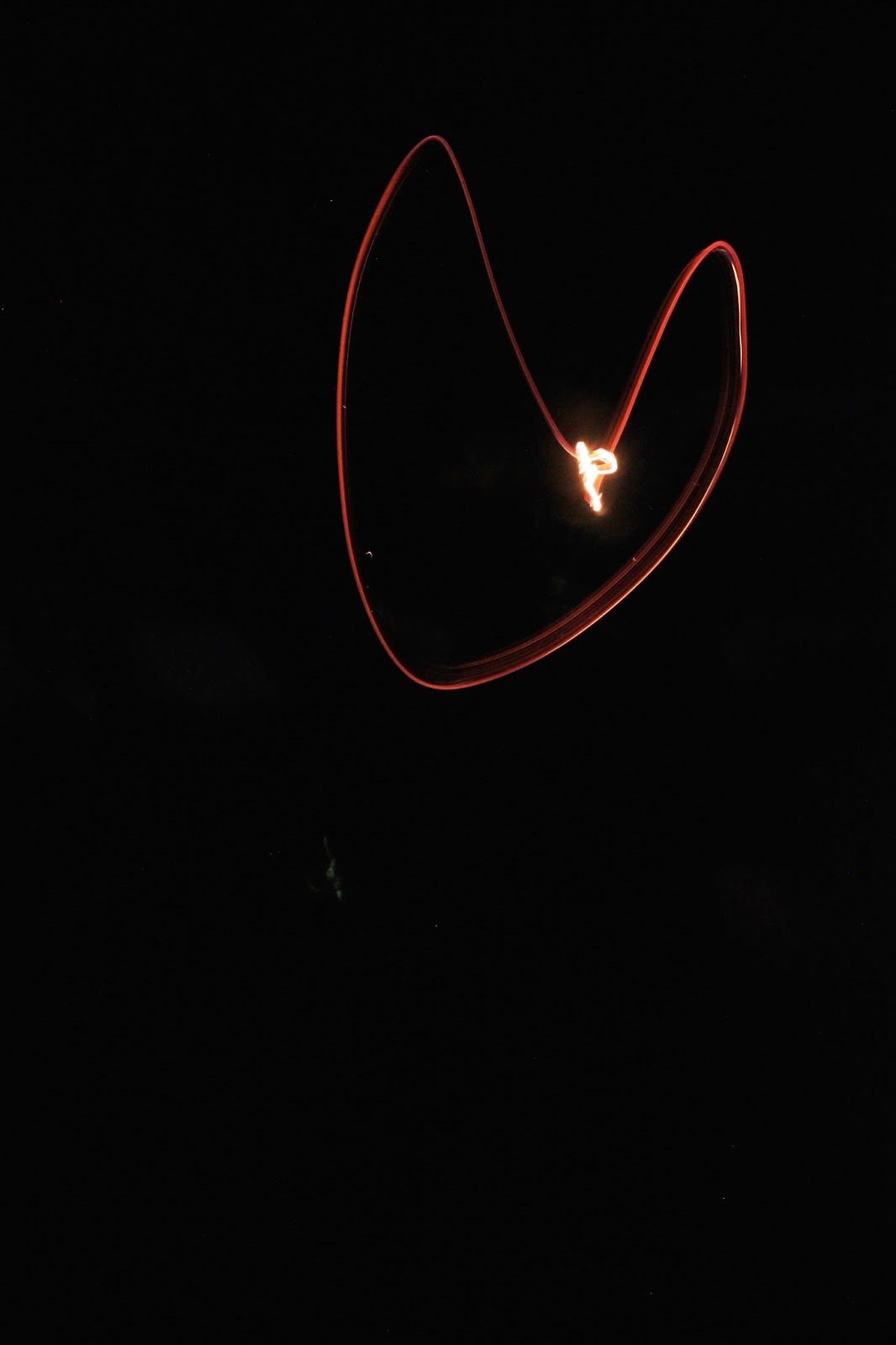 Thomas caught a stick on fire and waved it in a shape.  With a long exposure you can figure out the shape.  It was fun. 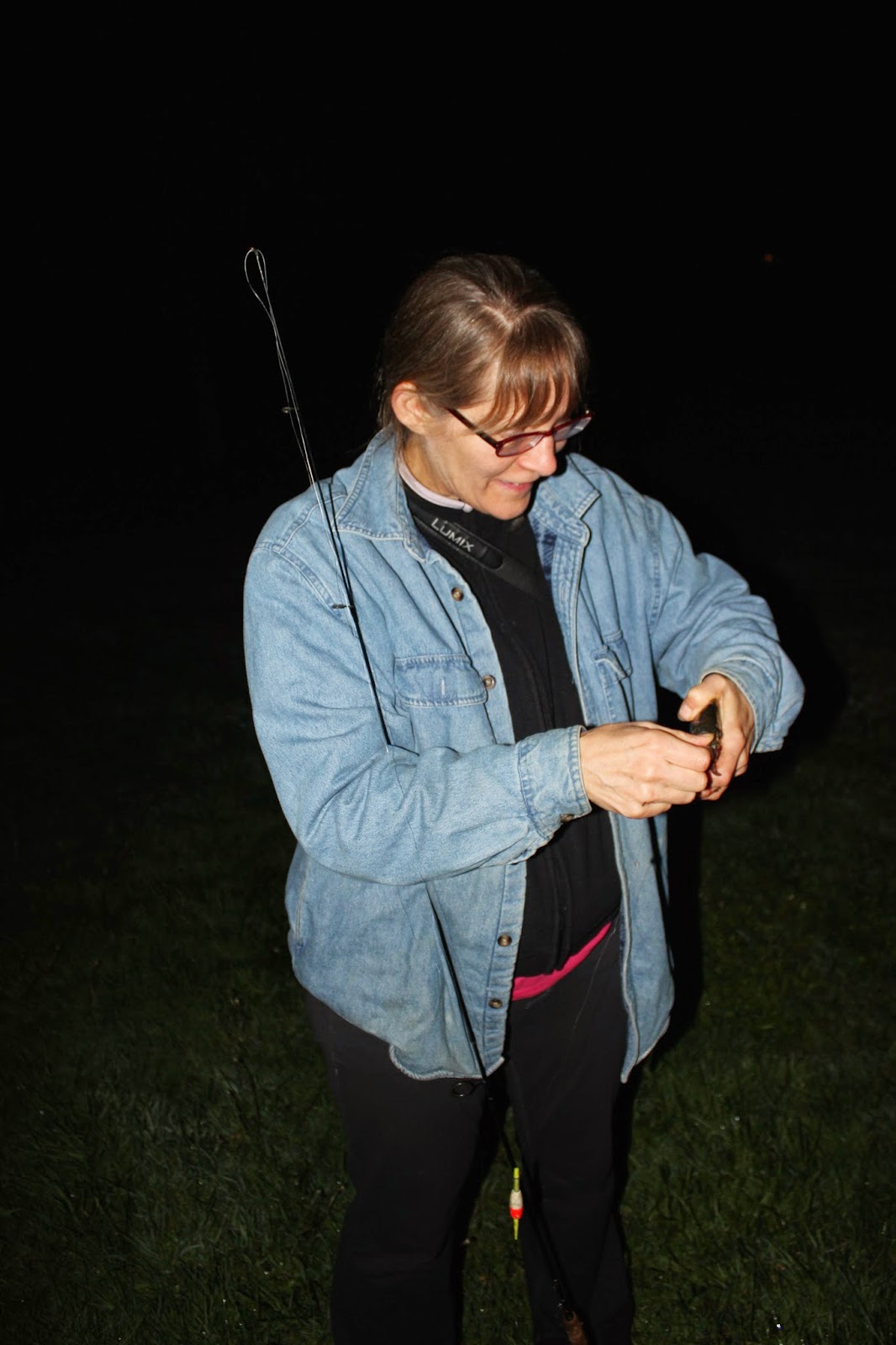 Mary loves to fish and fished even when it was too dark to see her bobber anymore. 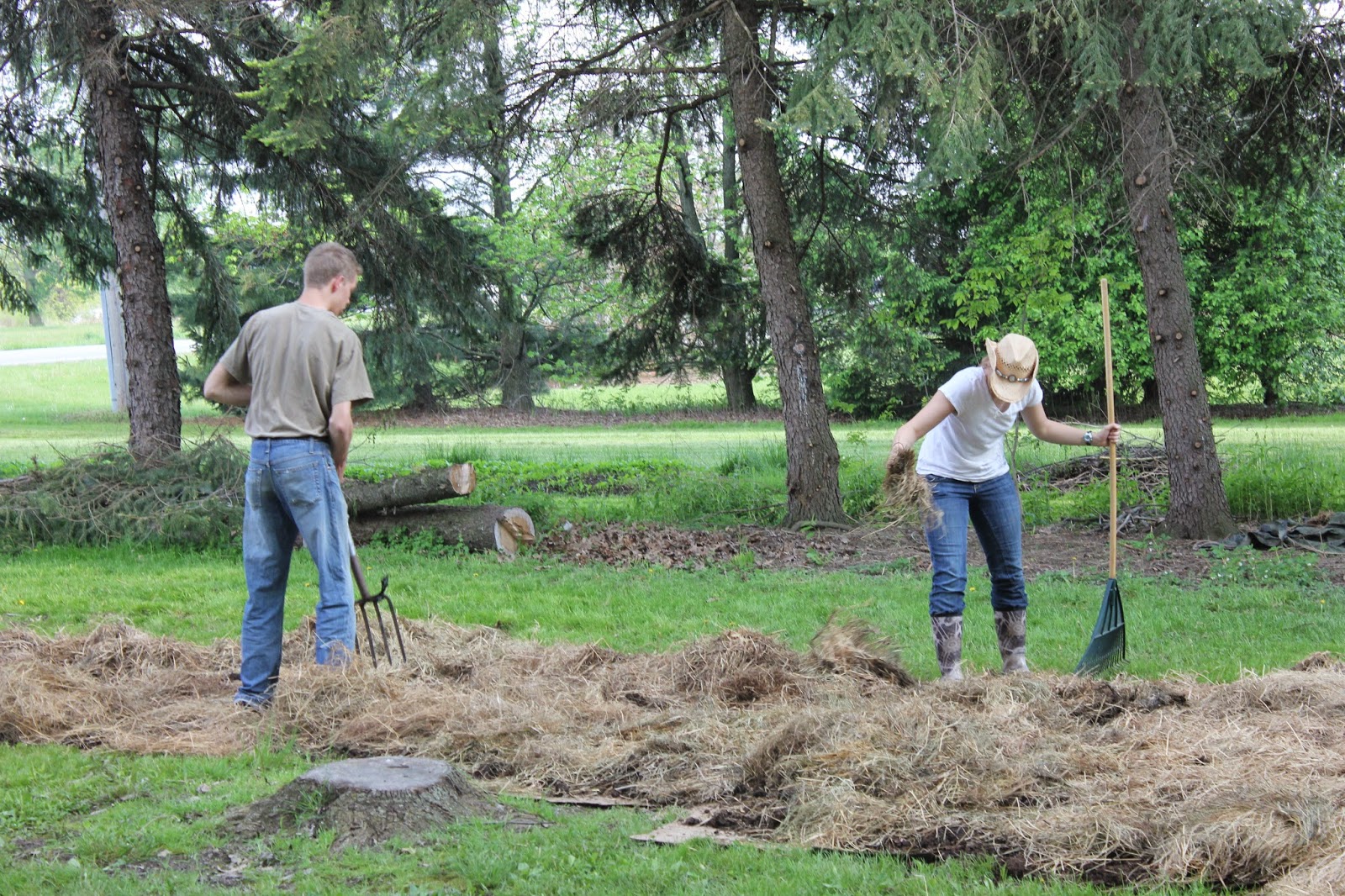 Karen and Paul worked to help me get my garden beds ready to plant. 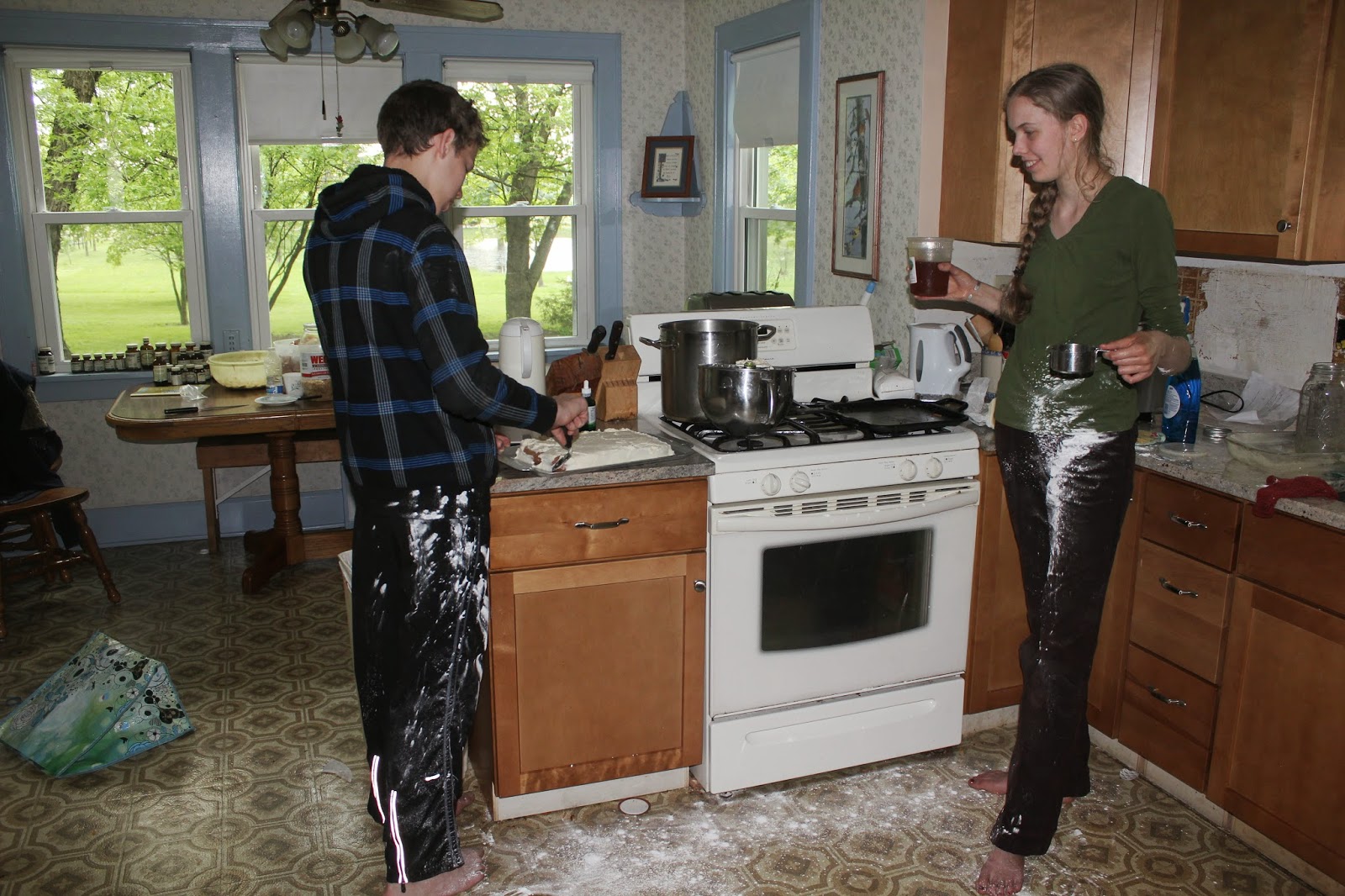 Thomas was busy with a baking project.  Michelle had another project going, but when she went to grab it out of the cupboard, it was a big mess!!!  Someone hadn't put the tie back on the top. 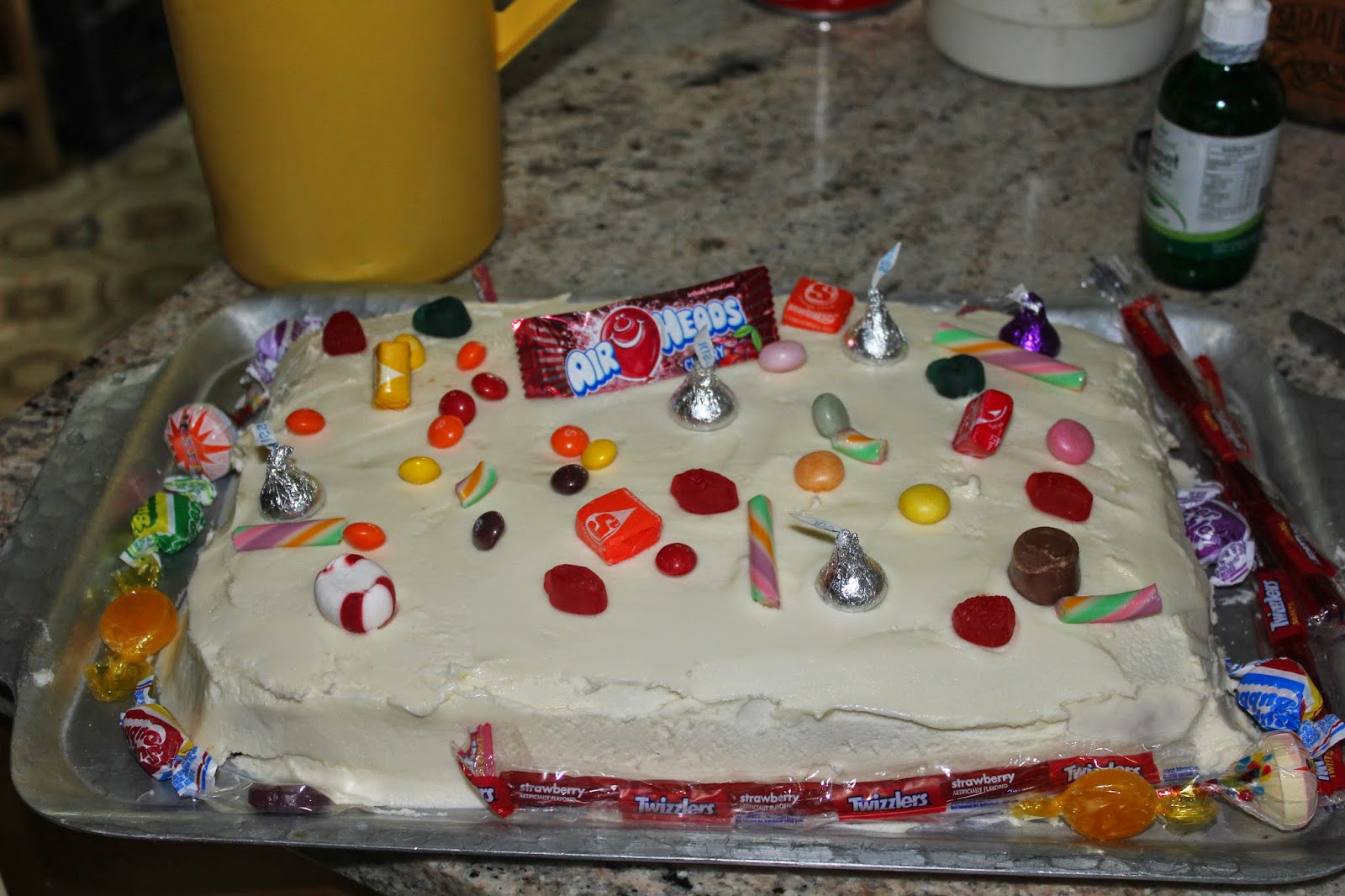 Here is Thomas's final project.  He decorated it with candy from participating in sweepstake.  It was very tasty and gluten free. 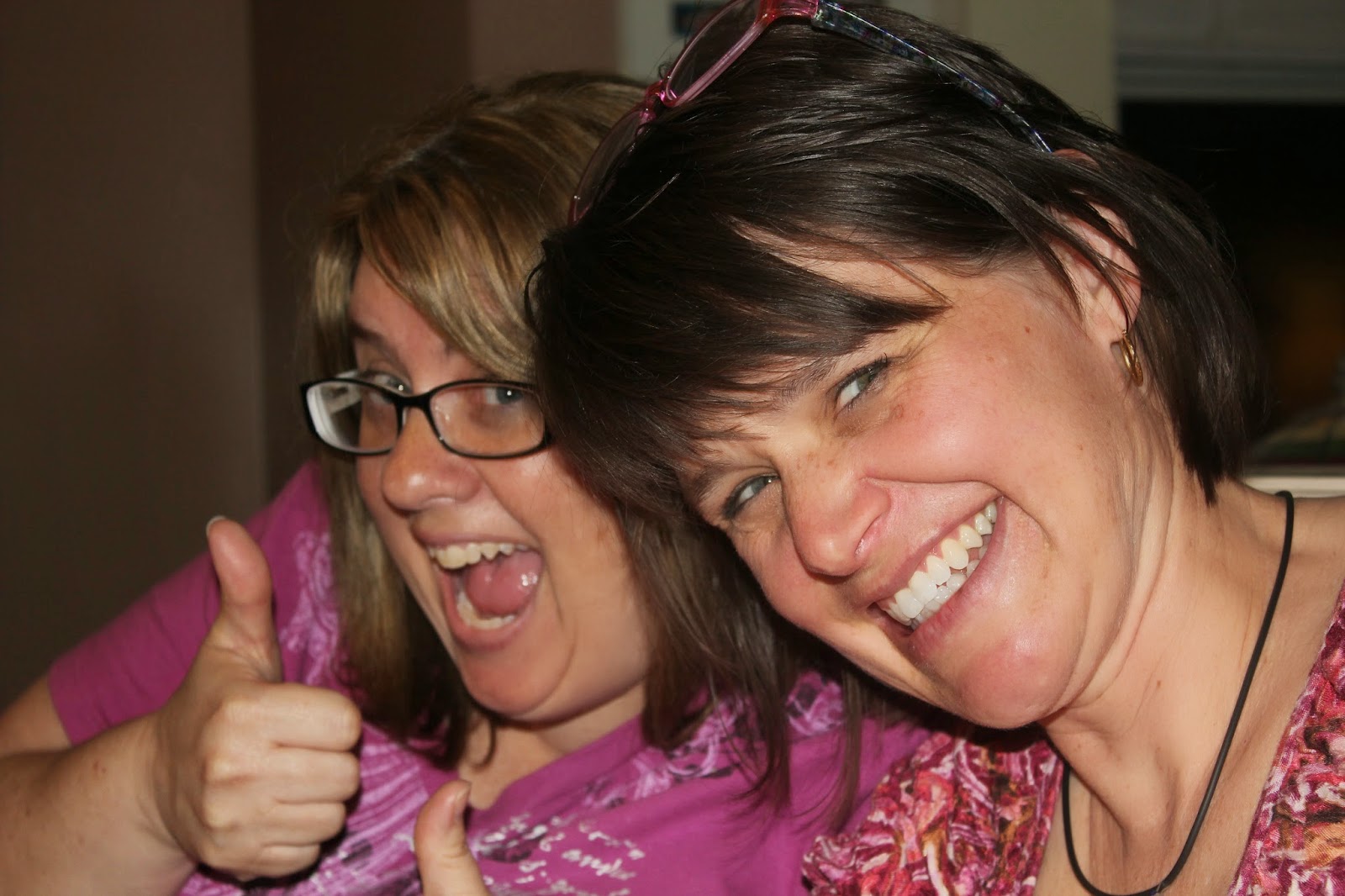 This may be what you find on your camera if you leave it lying around at a speech and debate meeting.  Not sure who borrowed it, but they got some fun pictures. 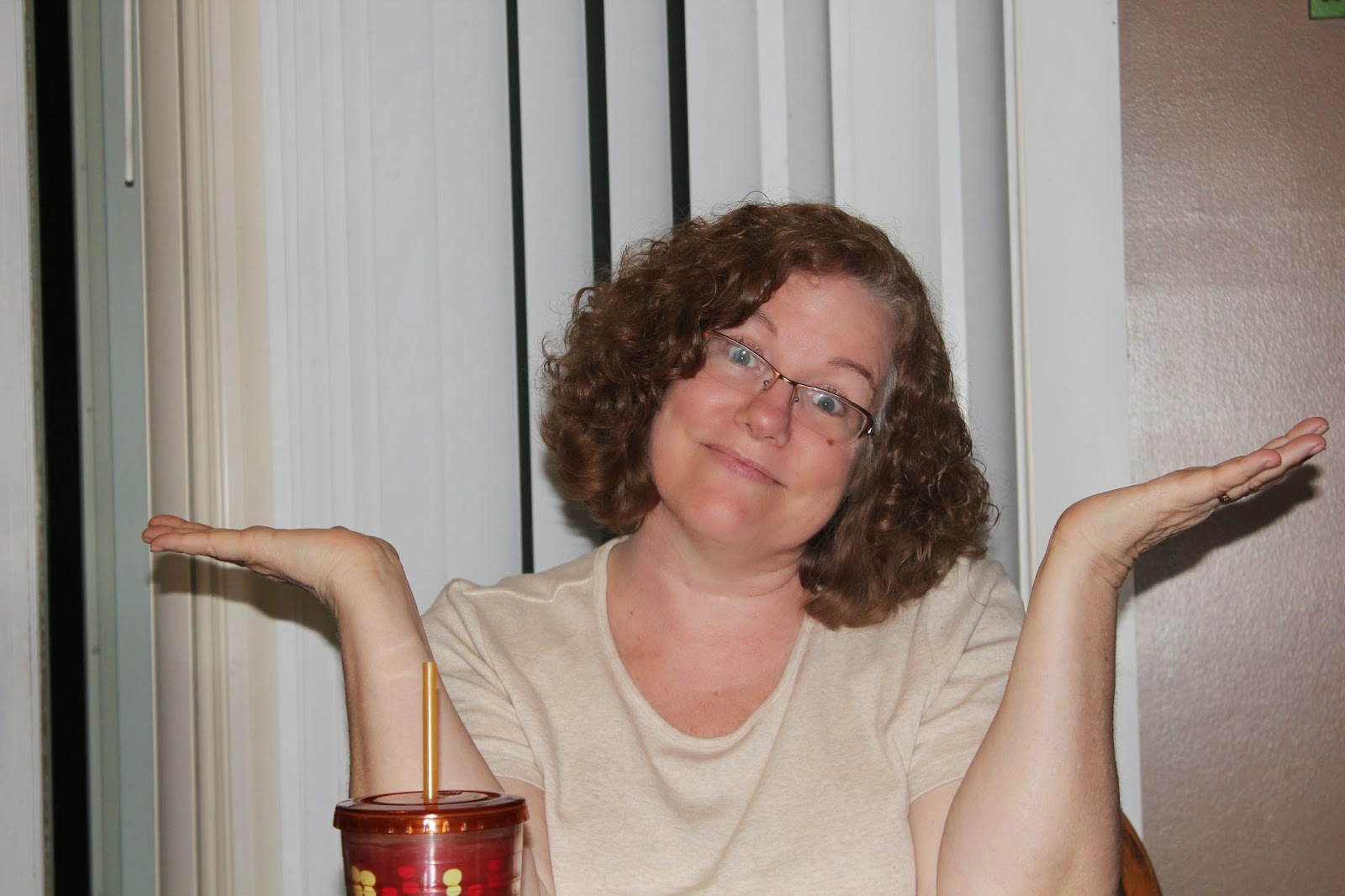 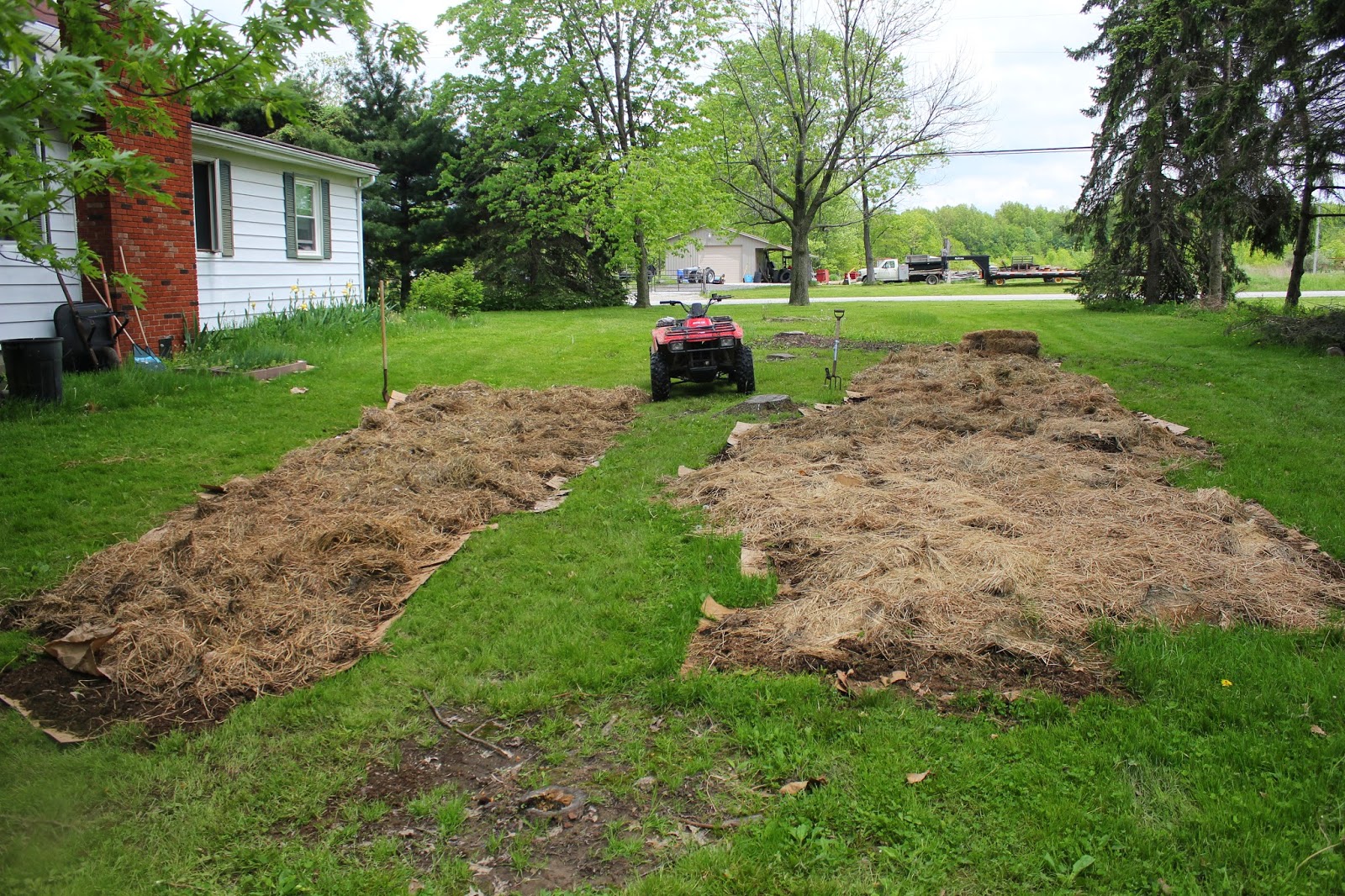 This how big our gardens are currently.  There is still room for growth, but I have stopped building the beds and started planting.  I can increase the size of the beds along the way.

I will spare you the pictures, but this week we moved the older chicks into a chicken trailer.  I will post pictures in a later post. When I went to move them I realized that it seemed like there were a lot fewer chicks there.  I counted them and found there was only 44 instead of 64.  We had been gone over the weekend at the debate tournament and I hadn't been out to check on them.  Paul had been feeding them.  I was at a lost to figure out where that many had disappeared to.  I checked with my brother ( Who by the way, brought me another beautiful load of aged manure this week!!!) and he inspected our stall.  I found that there was about 15 of the chicks lying dead behind the hay bale in there.  Apparently, a possum had gone in and killed them.  There was not a mark on them.  The possum had gone in and suffocated them.  So sad!  This was our first big loss.  I was really bummed.  She had even done in one of our great big Jersey Giant roosters that must have weighed about 8 pounds.  She killed at least one of each kind of bird.  She wasn't prejudiced.  I guess the good news is that she made her presence known before we put the brooder in there.  We won't be using the stall for chicks any time soon. 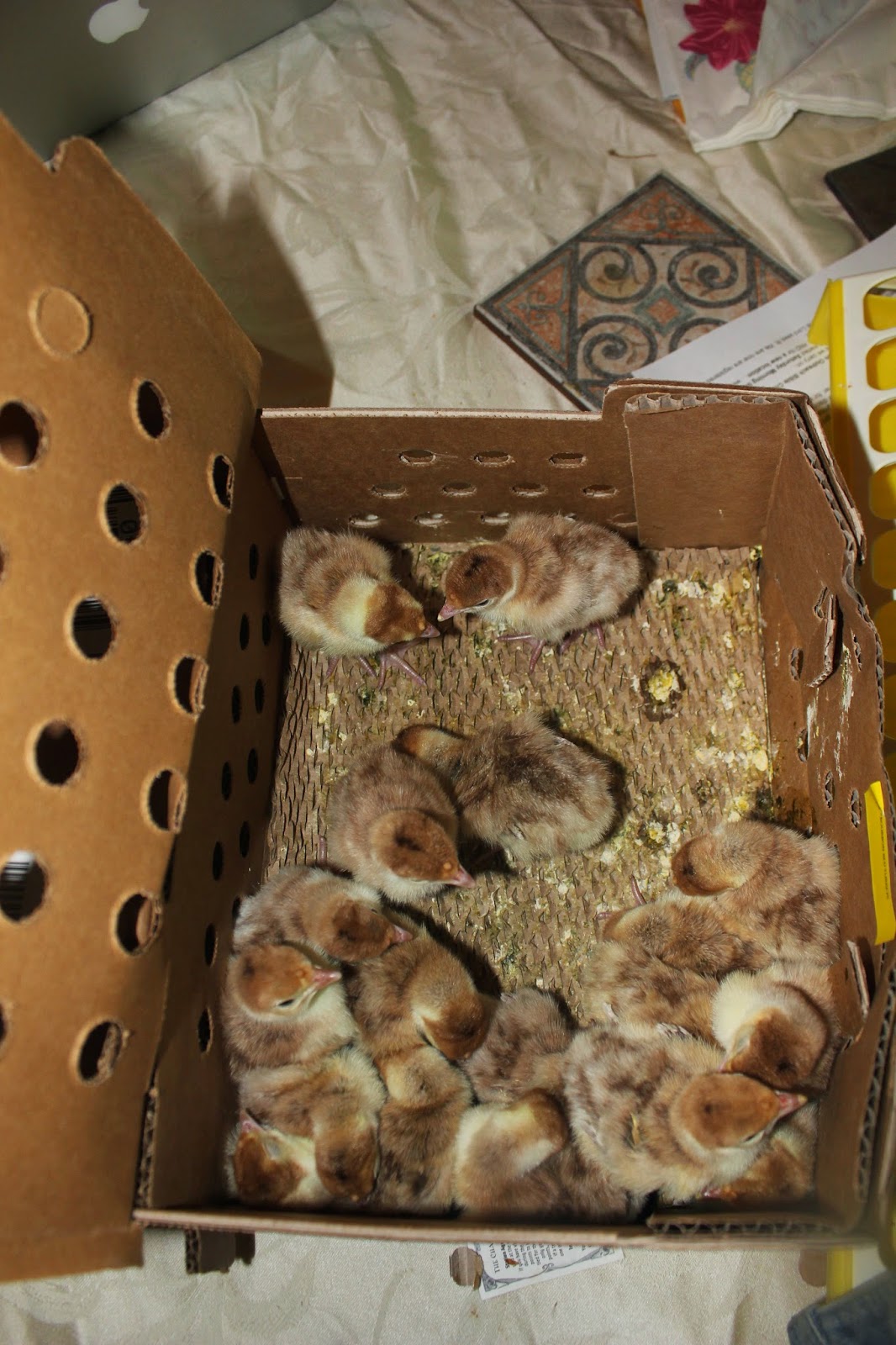 This week we added to our menagerie 20 turkey poults.  They are so cute.  They are feisty too. 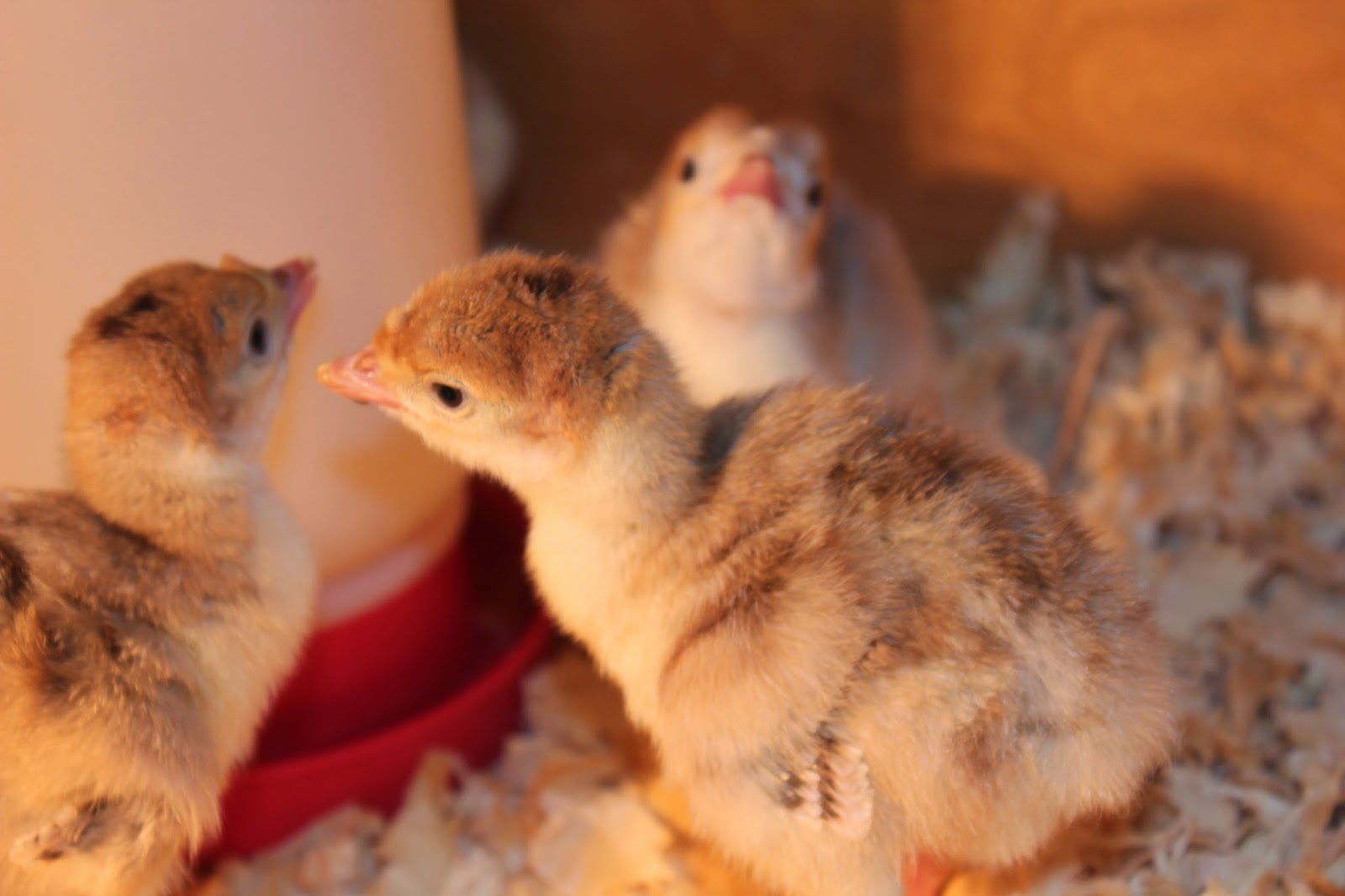 These are bourbon reds.  It is a heritage breed of turkeys.  I am hoping to be able to breed and sell them in the future.  We shall see.  I was pleased at how well the poults did despite being shipped from New Mexico.  They were all lively.  The heritage birds are a lot smarter than the broad breasted birds.  They learned to eat and drink easily.  Yeah!  We also got some new chicks this week.  It is a busy time!
Posted by ~The Mangos~ at 8:30 AM