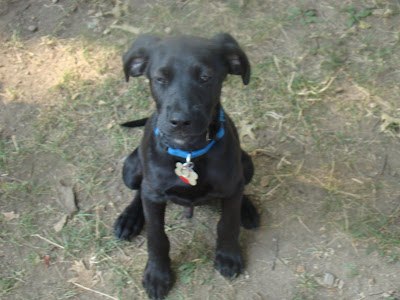 Dallas has discovered the neighbor's dogs. He loves going over there and running with them. They are big dogs and no longer puppies. They are good for him as they won't let him be the boss. They make him submit. This does carry over to his training at home. This morning when I looked out the window, he had digged a hole under the fence and was playing with his doggy buddies. When we called him to come home he tried and tried to come, but the board that so easily allowed him out didn't move the same amount to let him come back. Finally, the neighbor kindly came out and lifted him over the fence. 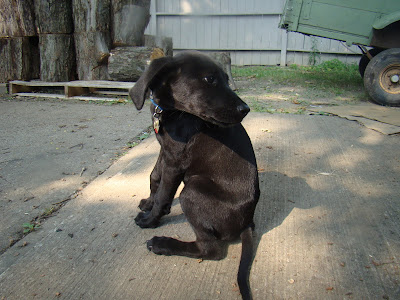 Dallas is very good about sitting and has recently learned to fetch more consistently. He will go get the ball and bring it directly back to you. He used to try and run off. He has pretty much stopped the puppy nipping thing. He has grown a lot. He weighs almost 20 pounds now. He is now about 14 weeks old. He is a very bright pup. 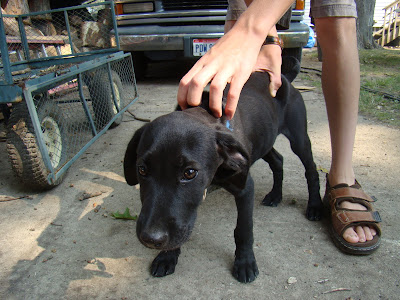 Dallas has learned to walk on a leash. He is still needing some work in this department, but it's coming. He was very glad to see us come home after being away for a week.
He is thriving on his BARF diet. His coat absolutely shines. His eyes are bright and his ears are clear. We are noticing that his coat, especially on his head is turning brownish. No- it is not the cocoa powder residue. I think that it must be his hound roots showing through.
~Mom
Posted by ~The Mangos~ at 8:53 PM