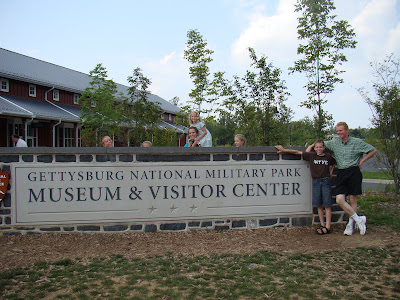 We had a splendid time at the Gettysburg Visitor Center. There was lots to see and do. We spent about 2.5 hours in the museum and it was not enough. They have a nice movie there that gives an over view of the war and the Battle of Gettysburg specifically. It really tied in well with our history study from last year. 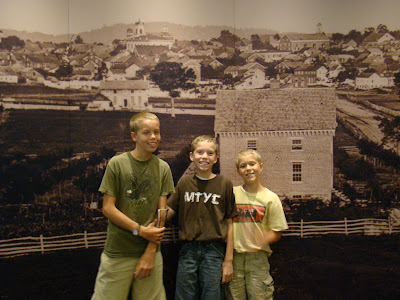 The boys enjoyed looking at all the photos and articles from the war. 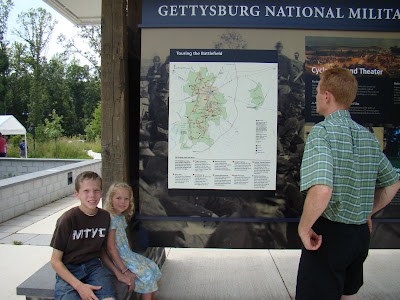 It was a really HOT day and we enjoyed the air conditioning. We had a little trouble finding the center, but we finally asked a local lady and she sent us straight here. There are 23 miles of road that wind through the different sites of the battle. It is pretty amazing. It is so much different to see it in person, than to read about it in a book. I guess you'll knew that already. 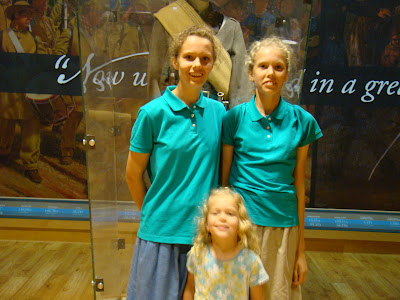 The girls and I wore our matching outfits. It does help us to keep track of each other. The Center was not crowded at all. I am not sure why. We were actually able to park very close, which was a blessing. 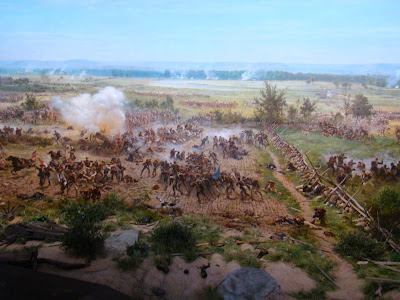 We also really enjoyed the diorama. It is a 360 degree painting of the whole Gettysburg area. They narrate the battle and light up the areas where the fighting occurred. There is lots of sound effects of cannons booming and rifles cracking. The painting is approx. 40 foot high and a couple hundred feet long. It is in a circle around you. The painting was done in the late 1800's and was just recently reconditioned. They have filled in the foreground with rocks and grass and battle litter, so your eye can barely determine where the painting begins. They say that the Civil War veterans who saw it started weeping as it brought back so many memories and was so close to the real thing. 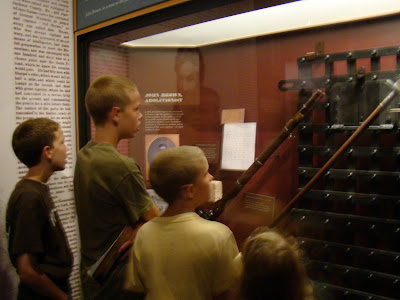 The boys enjoyed studying all the weapons, especially the rifles, from the war. 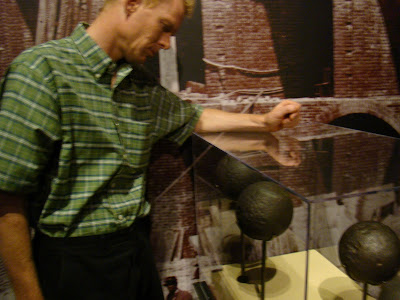 These are some actual cannon balls from the Civil War. 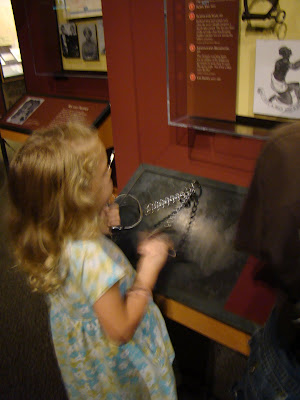 Elizabeth is playing with the chains that they used to keep the slaves confined with. I do thank God for our freedom. 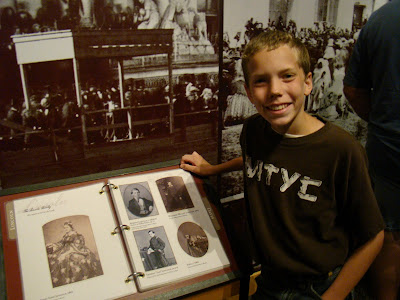 This was a book of family photos of the Lincolns and the Jefferson Davis family. The museum is organized by phrases of the Gettysburg address. It was neat as that was something that we had memorized as a family last year. They had an actor reciting it in the movie that they showed in the beginning. 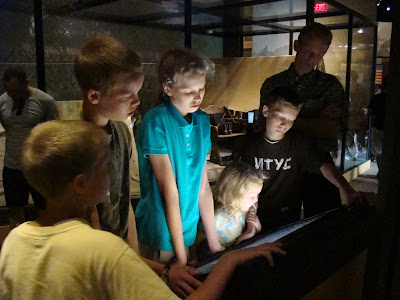 They also had some high tech stuff for the children. Here the children are trying to figure out what they need to put in their backpack as they are breaking camp and heading out on a march to battle. They are limited as everything was weighed out and they can only carry a certain weight. It was a challenge. There was also a game where they had to try and read Semaphore (Army flag code) and another to pick the proper bugle call.
REVIEW:
This is a good place to visit with children that are 7 and up. It is mostly a look and read facility. A younger child might get bored quickly. It is also not inexpensive. For our family of 2 parents and 6 children it would have cost $57. We opted for the year long family membership. It was only $60. Dad and Mr. Boots are hoping to be back in the area this fall and might get to stop in again. The movie and the Diorama are included in that price. This center is an excellent prelude to the drive through the battlefield (free) as it gives you a good review of what happened where.
~Mom
Posted by ~The Mangos~ at 2:12 PM