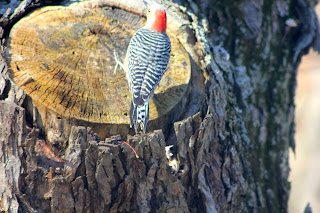 There has been a lot happening on the farm.  We have lots of adventures!  However, the camera is not usually on and ready to go when the unexpected action starts, so all I have here is the after pictures.
I can still tell you the stories they represent!

This friendly woodpecker showed up during school hours this week, of course we had to stop and take pictures since it was right outside our window.  The Great Blue Heron also returned this week for a snack from the pond. 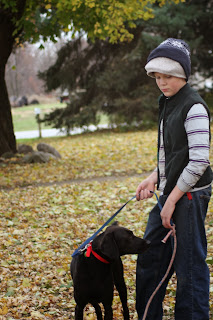 The Boss cat was teasing Dallas and was sitting only a foot or two beyond where his leash would let him go.  Then when the cat decided to run along, Dallas took off running after him and snapped his collar. Oooops.  He didn't hurt the cat, just chased him.  There is mutual respect on behalf of the two critters for each other.  Now Dallas has a bright red collar with a metal clasp instead of plastic.  Hopefullly, that will last awhile. 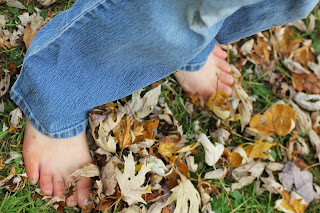 This girl is definitely is her mother's child.  Not only does she read a lot, she also never gets cold.  She was outside running around without any shoes.  Must have warmed up you say?  Only slightly.  The air temp was in the 40's and we still have patches of snow on the ground in the shade. 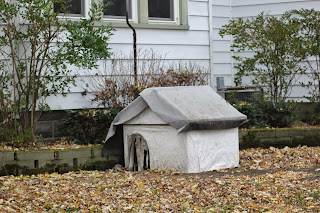 Dallas now has his official doghouse here at the farm.  He prefers sleeping in the backhall, but it does give him weather protection during the day. 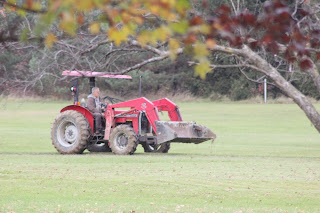 Why is Earl driving his tractor in our yard? Funny you should ask.... 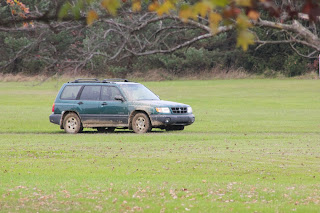 Why is Paul's car all muddy?   Here's the story.  Paul decided that he would haul the wood he needed to build his tree stand out to the woods in his car.  It has all wheel drive.  He chose to drive it through the fields rather than around by the path.  Not a terribly wise decision.  When he started out there was a frozen crust on the field, but before he got all the way to the back the temperature warmed up and he broke through.  His car sunk into the axles and even with a winch he could not move it.  He tried and tried.  He ended up having to ask the neighbor for a tow with his tractor.  Earl was happy to help out and even took the wood out to the woods later in his tractor.  Lessons learned... 1. A Subaru Forester is not an ATV 2. We need to get an ATV! 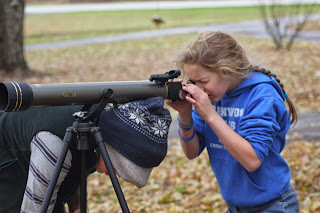 There are no secrets from younger siblings!  Our telescope gets used more this way than in stargazing.  It only gets aimed towards the back of the property... We don't creep out the neighbors.