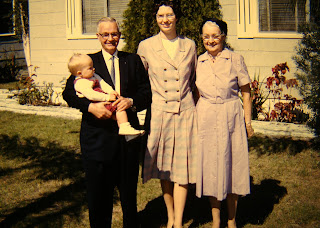 I am truly blessed to have had wonderful Grandparents and Great Grandparent!  This is a photo of my Great Grandma and Grandpa Lambert.  By the time I was born they lived in St Petersburg FL.  We would go down most every year to visit them.  My Grandpa would read books to me by the hour.  One of the first phrases I learned to say was "Read a book Grandpa!" The love of reading was transmitted to me by both sets of Grandparents. 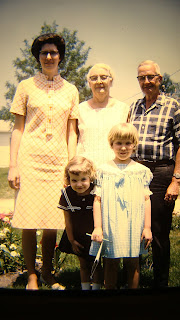 My Grandpa worked as a train engineer.  He also smoked a pipe.  Every time I smell pipe smoke something like his brand, it transports me back to my early childhood and visiting them in FL.  Incidentally, He died of lung cancer when I was about 12. My Grandma was a gentle lady. She was very patient with us as children.  She lived to be 81 and then she died of lung cancer also. 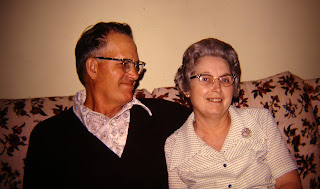 These are my Mom's parents.  My Grandpa died too young.  He wasn't even 70!  He was one of my very favorite people ever!  He was a great game player.  He was excellent at pinochle and horseshoes.  He was a quiet man who gave the best hugs ever!  He adored Grandma, even when she insisted on finishing most of his sentences.  He worked as an electrical engineer in the steel mills.  He was in a union and his schedule (re shifts) was always changing.  He built the house for the family himself. He loved daffodils.  He loved to go fishing and so did Grandma.  They raised a big bed of strawberries every summer so they would have money to go to Canada fishing.  All their different activities involved family.  Whether it was playing games or going on vacation they did them with their extended family.  I am blessed to be able to remember a few fishing trips to Canada with lots of cousins and grandparents and aunts and uncles.  The old guys were always happy to take along a child or two.  My grandpa taught me how to clean fish.  From the time I was six or seven we had to clean any fish we kept that was smaller than 12"!  Grandpa would do the bigger fish and the catfish.  He was a very patient teacher.

Grandma was a blessing.  She was a very neat and proper lady.  She was proud of the fact that she NEVER in all her life ever wore a pair of dungarees (jeans).  She also never did any formal exercise.  She was insistent that she would never lift weights.  Grandma was struck by lightning while she was in her house when she was in her mid thirties.  She had many health problems through the years.  Mostly relating to her gut. ( I strongly suspect that she may have had a gluten allergy)  She had at least three heart attacks.  She struggled with digestive issues and had many abdominal surgeries.  I called her my 'Grandma Grandma' because she was your traditional Grandma.  She never forgot a birthday or missed a gift giving event.  She was very affectionate and really enjoyed her grandchildren.  She was feisty but sweet.  She never considered herself very smart as she had had to repeat a grade in her elementary years. ( She did graduate from high school.)  BUT she would finish the newspaper crossword every day  and she read all the time.  Even when her mind had almost totally slipped away with dementia, she would catch you if you mis-added numbers or misspelled a word. She was doing word search puzzles right up until 3 days before she died. We were blessed to get to spend her later years with her close by.  She and Grandpa were excellent example of faithfulness in marriage. 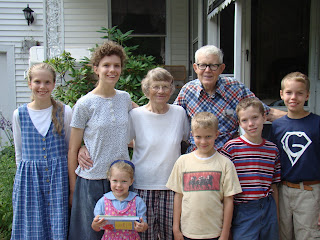 Our children are blessed to have a godly heritage on both sides of their family.  My DH parents met in college and raised a family of 9 children together.  They are both still living.  They currently reside in NM with a daughter and her family.  Bill worked as a science and Math teacher in the inner city for 30 years.  Then they retired and went to work at the New Tribes Flight training base in AZ for the next 18 years. Dad did maintenance and Mom ran the library and had other duties.  My father in law spent much time holding Bible Studies with prisoners in Arizona.  He would go to the jails as often as 10 times a week.  This picture was taken at one of their last visits to our house.  They are no longer able to travel up to Ohio.  They are in their mid eighties.  Now we go as often as we can to visit them! 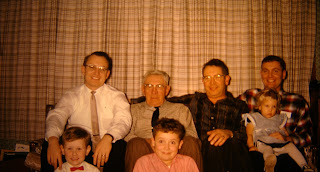 This is an old picture of my Dad's family (me and the guys).  The oldest looking gentleman was my Dad's grandfather.  Then my Grandpa Austin Reader next to him.  On the left side is my uncle Paul and his son Tim and then in the middle on the floor is my Dad's youngest brother, David.  When my Dad was 13 Grandpa bought a farm right on SR303.  My dad remembers with great fondness those years of living on the farm.  Grandpa had his own hanger and airstrip on the farm and taught my Dad to fly as a teenager.  They had horses and a nice pond.  If I remember this right.... Grandpa started his working life working in a bicycle shop.  Then he worked for Goodyear tire and Rubber.  His final career was working for NACA ( which later became NASA).  He was well known for his inventiveness.  He often took principles and things he learned while working in the bicycle shop and applied them to spacecraft and rockets.  He was a very bright man ( and so are all his children).  He struggled with heart problems and high blood pressure all his life.  He had one of the first open heart surgeries done at the Cleveland Clinic.  He died of a massive heart attack at the age of 54 while saying grace over dinner. 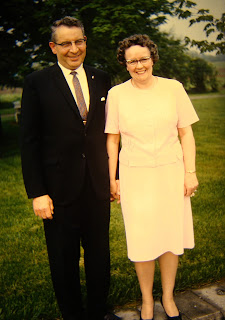 This is My Grandma and Grandpa Reader at their farm.  I have very little memory of them together as I was only 4 when Grandpa died.  I do remember my dad taking me out to visit at the farm when I was a young child.  Mom and my sister would take a nap and we would go off to play at the farm.

After Grandpa died,  Grandma kind of lost her anchor in life.  She left the farm and bought a house and stayed there until her youngest finished high school.  Then she became a travel agent and travelled all over the world.  Israel was one of her favorite places to go. She also went all over Europe.  She moved to florida and was in the Clearwater area.  She moved from apartment to apartment.  She was robbed frequently.  One time her son was going to be coming home on furlough (he was in the navy) while she was on a trip.  She hid all her valuables, but she wanted him to know where she had hid them so he could use the TV etc when he got there.  So she left him a note.  She was robbed again before he got there, and everything on the note was taken, But at least the thieves didn't have to mess up the house to locate it.  She was a smart lady though.  Another time, she was home alone when thieves were trying to break in.  She hollered loudly, "David, get your gun, someone's trying to break in!"  They left in a hurry!
Grandma was an incredibly gifted knitter. Grandma would knit a sweater EVERY week during WWII.  All the ladies would get together and knit wool sweaters for the sailors. Grandma spent her last years near-by. Visits with Grandma were always fun and unique. She was a wildly creative lady.  Her projects (and food) either ended up amazing or terrible.  There was no middle ground. Mom and Dad took care of her and then she ended up at a nursing home when her dementia worsened.  She lived to be almost 90. 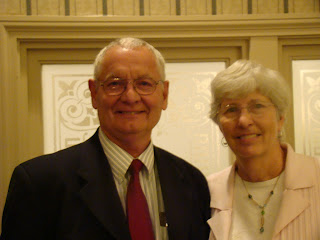 These are my parents.  They have been wonderful parents.  One of the neatest things in my life has been to see God work and change their lives through the years.  They have taught me much about faithfulness and hospitality.  My children have been privileged to grow up near them.

I know my children will always look back with fond memories to the times they got to spend with their grandparents... on both sides!
I know I do!