We have the Keys and are Ready to Start Rolling! 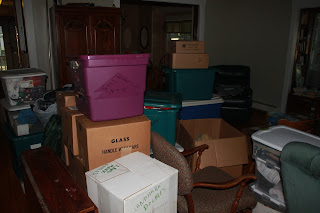 Tuesday morning we left the house early to go sign the final paperwork and give them the check and make the buying of the farm official.  When I left, the living room was packed with boxes!  We have cleaned out the storage areas and have that stuff ready to move.  We are packing from the outside in.  We also gathered some furniture to put in the family room of the new house.  Have to have somewhere to rest and think, as well as to gather for a meal. 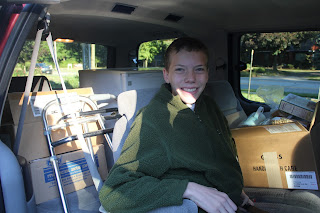 Thomas wanted to come along for the signing to make sure we didn't mess anything up  and that it was all done properly.  He was there in case we had any questions.  We packed the car full as we were heading right over to the farm afterwards.  There was approximately 70 pages of documents to sign.  Some were funny.  One paper we signed said that we agreed that we were not being coerced to sign these documents.  If coercion was an issue,  couldn't they just coerce us to sign that one too?!!!  Another favorite was the one that said that we were informed that failing to pay our mortgage would result in a negative reporting to the credit agency.  Apparently, somebody sued them when the bank did that.  Duh, Really?!!!  The lady gave us a form to sign that said we promised to use the farm as our primary residence for at least a year.  We then had to fill in our mailing address.  The Title agency lady informed us that filling in a different address on that form would be seen as a red flag that needed to be investigated.  The society we live in is CRAZY! 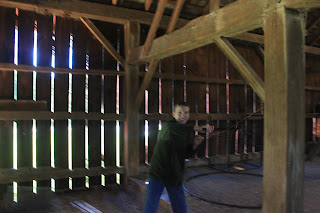 The seller for the farm was sitting happily in the waiting area when we exited.  He had all the keys ready to go.  He was so excited.  He looked like a guy who had just graduated.  He did say that he was going to miss the farm.  We offered to let him come visit and cut the grass anytime he wanted. ;-) . The farm comes with 4 cats.  He had bought and left us several 50# sacks of cat food.

We left the title bureau and headed straight down to the farm.  We wanted to see what we had bought.  We started off exploring the barn and shop.  Thomas brought his machete.  Not sure what he thought he would need it for in the barn. 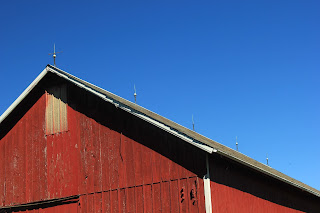 We then started through the house.  Checking out all the projects we want to get done before we move in.  We have decided that the kitchen must be redone, the living room and dining room floors will be refinished, and my office must be completed.  There will also need to be some basic wallpaper stripping and painting done in some of the bedrooms.  My Dh would also like to redo the master bedroom ceiling.  It is low and a little tacky.  He says it reminds him of a cheap motel.

We met two of the neighbors.  Earl and Charlie.  Earl has done all the maintenance on the farm for the last ten years.  He filled us in on all the projects that needed to be done around the place.  He told us that we needed to run a new electric line out to the shop and barn.  Then in the next breath he told us he had a trencher that he would be happy to loan us to do the job.  He is a hay farmer, among other things, and he would be happy to help us do our hay fields.  He is a gift from God.  He also told us where to get healthy steers from a local neighbor.   Charlie came over later when he got home from work.  He is a SWAT cop.  He had all his gear with him and he showed us his guns.  He has a shooting range in his backyard and is a shooting instructor.  He offered to have the kids over to teach them how to shoot.  He also said that if we had any trouble to give a holler and he would come right over.  He said he doesn't miss when he shoots.  Yep, we live in the country now!  It may be a very busy street, but it is clearly a neighborhood. 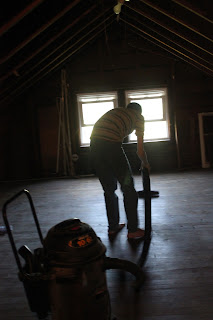 Thomas and I went upstairs and worked on getting the attic ready to receive all the boxes.  We were happy to find that Tom had left behind a commercial shopvac for us.  Thomas swept while I decided how to organize everything. 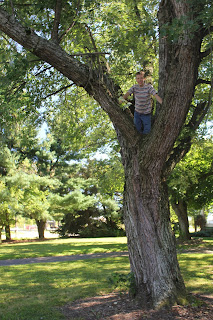 Thomas checked out the tree situation while we waited for the other kids to show up.  He had to see what trees he could climb.  He found a piece of old rope on a branch, where tis tree used to have a swing on it.  Hopefully, we can get one up again soon! 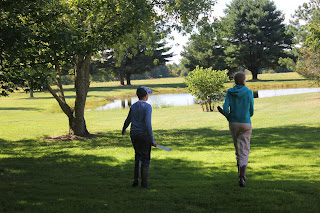 The other children arrived and took the machetes to chop a path to the back of the property.  It is a half mile back there, so it took awhile.  They found a pear tree and a couple crabapples. 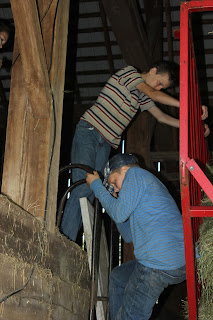 They all explored the top of the barn and enjoyed the rope swing that hangs from the roof. Then we began to explore and clean out the shop area.  The boys were fascinated to find an old fashioned oil can.
There has been a cat living in the shop for several months.  There is a definite odor in there because of that.  We moved the cat and cleaned everything out and then power washed it.  It will need some more work, but at least we have started.  We need to get the shop set up as my office ASAP. 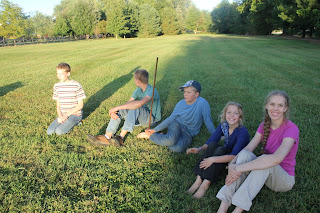 When most of that work was done the kids decided to take the junk wood and burn it in the fire pit.  They all enjoyed sitting around and throwing stuff in the fire!  Joann had to leave before this and missed the fun. 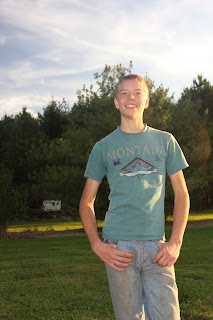 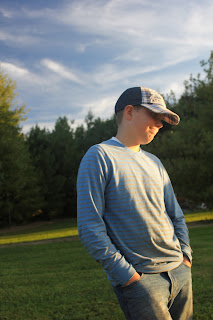 After only one day, the kids are starting to look like they belong on the farm. 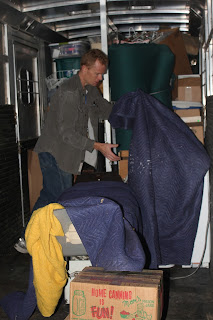 In the evening, we had our first visitors.  My brother and his wife and their children  brought the trailer over that had all our boxes and other things in it.  They took a tour of the place and seemed really pleased.  My brother is the one who found this property for us.  We really appreciate their help.  He has a large horse trailer.  I couldn't believe how much it held!  It is a real blessing! 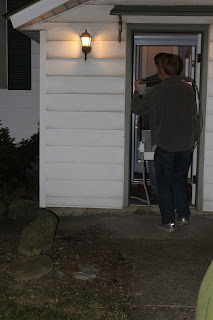 We unloaded the trailer and were pleased to find the table we brought over.  We put it in the kitchen found a collection of things that might be called chairs and ate our first meal at the farm.  It was a great day!!!
Posted by ~The Mangos~ at 10:13 PM